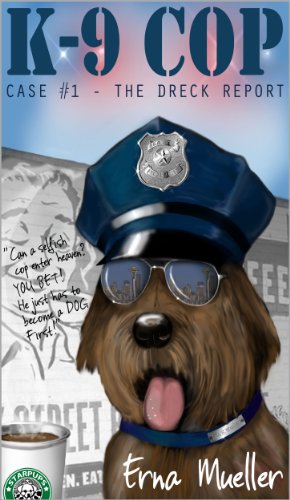 Even after a lifetime of putting dangerous criminals behind bars, heartless cop Spencer needs to redeem himself before he may enter heaven. Only the J.R.P. (Jerk Redemption Program) can help him now. He’s sent back to earth in the body of his K-9 partner to help a troubled teenager and his dysfunctional family. Spencer also swallowed an important microchip his killers need to execute their evil plan. Can Spencer maul the shins (and other choice areas) of the criminals and stop them? Can a selfish man find a heart? You bet, he just has to become a dog first.

What Inspired You to Write Your Book?
I thought a Young Adult book would be a great idea to write for a first-time novelist. I always loved family orientated books and movies and was searching for a story that depicts the human condition with all its splendor and frailties. What better way than through a surly cop who has to go back to earth in the body of his K-9 partner? The cop needs to help a troubled teenager and his dysfunctional family in order to be redeemed.

How Did You Come up With Your Characters?
The theme of my book helped me to flesh out the characters and their actions. I remember teenaged angst and what it was like. I try to feel what they’re feeling. How will they react, how have I seen real people similar to them react? Is their reaction true to their character? What motivates them?