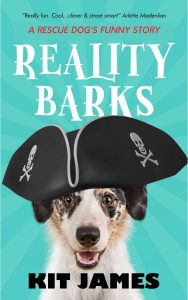 When a rescue dog is first adopted he has no idea what awaits him in his new life. Will it be good or bad? That’s all Barney worries about. But sharing his new life between two slick, metro couples, living in two different homes, well that’s an eye-opener. Re-named ‘Elliott’, he’s a mutt of a country dog discovering city life in Sydney. But that’s only the start of it, and, boy is his life about to change big time. Jamie, the Ad man Alpha Male of the foursome, has secret plans to turn Elliott into a moneymaking TV star. Told from the dog’s POV, it’s “a dog’s version of life, death and stardom”, with a surprise ending.

About the Author
I was born in England and came to Australia with my parents in the Seventies. Shortly afterwards I was adopted by a stray dog, and that was that. Dogs have played a big part in my life ever since. I love them for their honesty, their faithfulness, and, yes, for their sense of humour too. A characteristic of every dog who has shared his life with me has been an inspiration for the characters in my Mutt to Megastar series. And I say “who” because I think of dogs as being an animal person, just as we humans are.
What was the greatest challenge in writing the Mutt to Megastar series?
What I cared about most was making Elliott’s character believable. It’s important for readers to care about him, and to relate to his fear of being sent back to the Dog Pound believable. My wife and I have adopted quite a few rescue dogs, and they never forget the hard times they went through. It’s always there, just under the surface, no matter how much you love them and help them to feel secure. At the same time I wanted this to be a humorous story, and believable as told from the dog’s perspective. We humans are a funny, and sometimes, a weird lot, especially when we’re scheming, like Jamie is.
An Amazon reviewer beautifully summed up Elliott's story as "a dog's version of life, death and stardom." 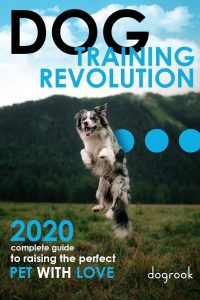 2020 Complete Guide to Raising the Perfect Pet with Love

Do you have a dog? or are you just going to have a puppy? Then this book is for you. Here we show you a revolutionary approach to parenting and training. Many people in the street believe that taking care of a domestic dog is easy. You just need to take them out for a walk and feed them on time. This is a false statement. First, you need to understand that caring for an adult dog and caring for a puppy is different. We’ll first look at caring for a puppy. and these questions will be addressed in our book.
In our book you will find information about:
Periodization of Dog Development
General information about keeping and custody of a puppy
All the wisdom of a domestic dog care
Dog Training
and much more!

About the Author
Russel Embury was born 10 may 1994. Specialist in the field of odontology, cynology; author of the book Dog Training Revolution, as well as a large number of articles in various publications about dog training.
Since childhood, he has been fond of dog breeding, was engaged in breeding Dobermans.
International Cynology Judge since 2004, All-Round Judge since 2012
He has been in the cynology world since his childhood. His first love was the German Shepherd female Briski. At first, he bred German Shepherds, Great Danes, Šarplaninac, Caucasian Shepherd Dogs, and now he is a Rottweiler breeder and the owner of the kennel His tree rottweilers won the titles Top Dog of Montenegro twice.
He has been judging in Montenegro, Serbia, the Republic of Macedonia, Bosnia and Herzegovina, Bulgaria, Czech Republic, Moldova.

Sergeant Stubby In The Great War by Melissa Pilgrim

When a little stray puppy befriends a soldier named Robert Conroy training to go to war in 1917, he starts out on an amazing journey as the private teaches him all he needs to know to become a U.S. Army soldier too. After sneaking him on board a ship heading to Europe, the two best friends fight side-by-side in what soon becomes the biggest war the world has ever seen!

The little dog, affectionately named “Stubby” because of his stout tail, learns to bravely confront all the brand new warfare devices he encounters including tanks, machine guns, planes, and mustard gas as he proudly serves his country in the First World War and becomes a true American war hero.

This well-researched historical fiction novella makes reading about history fun for readers both young and old(er). It’s an entertaining way to introduce young readers to all the “firsts” of World War I as they experience it all through the eyes of this real little dog who served in it so bravely.

There is a historical facts sheet at the end to let readers know which parts of the story were taken from real places, events, and battles and which parts were fictionalized (to keep the storyline moving at an interesting pace).

NOTE: A Lesson Plan and Glossary of terms related to the time period are available for FREE on the book’s website to accompany this book in a classroom setting.

END_OF_DOCUMENT_TOKEN_TO_BE_REPLACED

Written by an expert breeder: Learn the history of the German shepherd; tips, tricks and transitions from kennel to home with your new puppy, and tasty recipes your dog will love!

Link To Buy A Puppy Love Guide@ About the German Shepherd, Tips for Bringing your GSD Pup Home, and Doggone Delicious Recipes on Amazon

A name is destiny…Or is it? Young Vicky is reeling from the loss of her old horse Joe, but eager to help the flighty, rarely ridden young mare, Witch. Unpredictable and dangerous, Witch’s future is bleak. In her first moment with the horse no one trusted, Vicky changed Witch’s name to Gidget, a hopeful benediction.

“If only changing her name is all it took to change behavior,” the farm owner laments.

Despite her new name, Gidget, the horse formerly known as Witch, struggles to abandon old, unstable habits. Along the way, the fearful horse captures the heart of a grieving child, and miracles of healing unfold to a remarkable conclusion.

A story about changing one’s destiny.

Targeted Age Group: all ages, but written with adults in mind

This book is bargain priced from 03/10/2015 until 03/12/2015 Check book price before you buy, as prices can change due to expiration of the sale or other technical issues.

RHYMING FUN FOR THE WHOLE FAMILY!

Bob is a confused chicken. He’s not quite sure how he fits into life on the farm. Should he act like a cow, a pig, or maybe a horse instead? No matter how hard Bob tries to be like the other animals on the farm, he only ends up more confused. Will Bob figure it out in the end? A wonderfully illustrated children’s picture book!