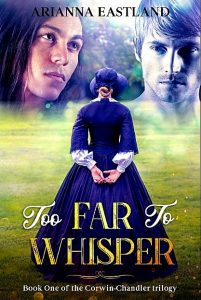 In 17th-century New England, Rosalind Chandler’s complete lack of interest in ever becoming a bride is a constant source of speculation and gossip in town.

Then a twist of fate delivers two men – enemies of each other – into her life on the same day. Although both men initially intrigue her, one soon turns her blood cold, while the other heats it to a degree she is unable to comprehend…or deny. Soon, her resolve never to wed begins to crumble.

The problem is, the proposal of marriage comes from the wrong man…and he refuses to be denied.

(This is the first book in the Corwin-Chandler trilogy. It is considered a stand-alone, however).

About the Author
Since childhood, Arianna Eastland has had an interest in the Native American culture in New England, where she currently resides, so it came as no surprise when her first historical romance, "Too Far to Whisper,” featured a Native American as one of the main characters.

Years of research went into the writing of the novel. What took the longest, according to the author, was looking up word origins so the characters in the 17th century would not be using any modern-day terms. She did, however, confess to taking a bit of creative liberty and eliminating the "thees" and "thous" spoken in that era because she felt they might be too distracting.

Recently, through a DNA test, the author discovered she actually is part Abenaki, which she hadn't expected. "That explains a lot!" she said.

Tom wants to move their relationship to the next level, but will Jackie’s past get in the way of their future?

Jackie Davis is no stranger to hardship. After a strict upbringing, her parents abandoned her when she got pregnant out of wedlock. Years later, she’s the co-owner of a successful café, mother to a beautiful six-year-old daughter named Abby, and dating a man who makes her heart race. For the first time in a while, she’s actually excited for the holidays.

When Tom Molsem applied as a cook at the local café, he wasn’t looking for a relationship. Haunted by demons from his military service, he was just happy to have a job he could handle. Now he’s the co-owner of that same restaurant and dating a woman who helped lay those ghosts to rest. With the past buried, he wants to build a future with his newfound family.

Tom and Jackie are eager to celebrate Christmas, but when Abby goes missing, the two must band together and discover the true gifts of the season: love, forgiveness, and new beginnings.

END_OF_DOCUMENT_TOKEN_TO_BE_REPLACED

This book is bargain priced from 06/12/2015 until 07/15/2015 Check book price before you buy, as prices can change due to expiration of the sale or other technical issues.

Abbey Hanover’s parents have just inherited a run-down old house in Seacliffe, Massachusetts. Being forced to spend the summer there is bad enough, but the place gives Abbey the creeps. Especially when she learns that Felicity Crane, a teenaged girl who lived there 300 years before, was falsely accused of being a witch…and hanged.

Then Abbey meets Zachariah, a guy who wears weird-looking clothes and talks strangely. So does Elspeth, who breaks into Abbey’s house one night and threatens her with a knife. Soon Abbey makes a shocking discovery: Zachariah and Elspeth are really time travelers from the long-ago past!

Now, as Abbey suddenly finds herself hurtling back through time, she meets the real Felicity Crane. Can Abbey save Felicity from the hangman’s noose…or will she be the one who’s branded as a witch–and sentenced to die?