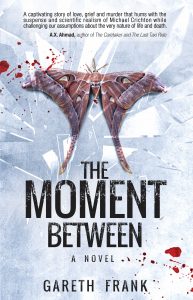 The Moment Between is a psychological thriller that brings death to life through the story of Doctor Hackett Metzger, a neurologist who struggles with grief four years after losing his wife when he becomes involved in a medical study of near-death experiences and meets a woman with a dangerous past. Hackett is reluctantly involved in the study because he doesn’t want to be reminded of his wife’s death and he doesn’t believe in the afterlife. His life and research are about to collide.

The Moment Between is not a fantasy or a ghost story. Instead, it uses fiction to explore the very real phenomena of near-death experiences in a way that forces the reader to challenge their own assumptions about the possibilities of what awaits us all in that moment between life and death.

On a warm December day in California, Cristael Bengtson died. As she found herself lifting up out of her body into a dark and terrifying abyss, Cristael cried out, “God, help me! Please help me! Where are you God! Help me now!”
Then a Light appeared, and it drew closer and closer until it enveloped Cristael with pure love.
“I was surrounded by ripples and cascades of Light, rising and falling all around me, like immense waves in the middle of a huge ocean. Held and sheltered within a mighty flow of Light, I was a tiny girl child, newborn. I reached out with my glowing hand, and I touched the Light. The swell of a mother’s breast took shape under my hand, and I was swept away by powerful currents of Light.”
The Light took Cristael to a great school, where she found herself in powerful currents of information, centered around the skills of writing and music. She was given information about her family and her mother and grandmother that she had never known.
Finally she was given the choice to stay in this beautiful place, or to return to Earth. Knowing that her sons would be deeply hurt if she stayed, and knowing that she had work to do, Cristael made the difficult choice to return to Earth.
As she returned, she found herself surrounded with unlimited numbers of what looked like huge LED screens that showed scenes from her entire life. And she remembered everything. Growing up in Pecos, her marriage, two children, and divorce. Her years as a teacher. The years she spent taking care of her dying mother. She remembered all her spiritual experiences and the many visionary and psychic experiences that led her and guided her through the years. She relived her struggles to deal with a culture and people that could not understand her.
This is a heart wrenching story, filled with happiness and nostalgia, sorrow and trials, love and grief, and the overarching joy of the spiritual.
One Amazon Top 1000 Reviewer says, “A wonderful story and very well written. This is a read that I would read again. I spent a long evening reading and thinking about this concept in a different light afterwards, and for that reason I would recommend it.”