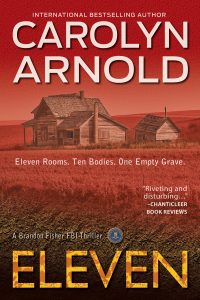 Compared to Silence of the Lambs and Criminal Minds by many readers, this gripping psychological thriller follows rookie FBI profiler Brandon Fisher as he takes on his first murder investigation. When the hunt takes a dark and personal turn, though, Brandon’s new career just might cost him his life. “Riveting and disturbing” (Chanticleer Book Reviews), Eleven will have you panting for breath and sleeping with the lights on.

Join the 2600-plus readers who have rated Eleven on Goodreads and plunge into a series that will take you into the minds of the most heinous and disturbing serial killers the world has ever seen.

“You just want to don a badge and gun and delve in there yourself… The characters are real, honest, and gritty, and the ‘baddies’ get under your skin…”
–The Kindle Book Review

“Must devour… As the story unraveled and clues unfolded, I felt like I was participating in the hunt as much as the agents in the story. And let me tell you, never did I see that ending coming…”
–Consuming Words

When Brandon Fisher joined the FBI Behavioral Analysis Unit, he knew he’d come up against psychopaths, sociopaths, pathological liars, and more. But when his first case takes him and the team to Salt Lick, Kentucky, to hunt down a ritualistic serial killer, he learns what nightmares are truly made of.

Beneath a residential property, local law enforcement discovered an underground bunker with circular graves that house the remains of ten victims. But that’s not all: there’s an empty eleventh grave, just waiting for a corpse. The killing clearly hasn’t come to an end yet, and with the property owner already behind bars, Brandon is certain there’s an apprentice who roams free.

As the FBI follows the evidence across the United States, Brandon starts to struggle with the deranged nature of his job description. And if the case itself isn’t going to be enough to push Brandon over the edge, he’s working in the shadow of Supervisory Special Agent Jack Harper, who expects nothing short of perfection from his team. To make matters even worse, it seems Brandon has become the target of a psychotic serial killer who wants to make him—or his wife—victim number eleven.

About the Author
CAROLYN ARNOLD is an international bestselling and award-winning author, as well as a speaker, teacher, and inspirational mentor. She has four continuing fiction series—Detective Madison Knight, Brandon Fisher FBI, McKinley Mysteries, and Matthew Connor Adventures—and has written nearly thirty books. Her genre diversity offers her readers everything from cozy to hard-boiled mysteries, and thrillers to action adventures.

Both her female detective and FBI profiler series have been praised by those in law enforcement as being accurate and entertaining, leading her to adopt the trademark: POLICE PROCEDURALS RESPECTED BY LAW ENFORCEMENT™.

Carolyn was born in a small town and enjoys spending time outdoors, but she also loves the lights of a big city. Grounded by her roots and lifted by her dreams, her overactive imagination insists that she tell her stories. Her intention is to touch the hearts of millions with her books, to entertain, inspire, and empower.

She currently lives in London, Ontario, with her husband and beagle and is a member of Crime Writers of Canada and Sisters in Crime.

Murder happens in Houston, but when the most recent murders take on disturbing similarities, local law enforcement officers fear a serial killer is roaming their streets.
Former sheriff’s department sergeant Jade Monroe has just graduated from the FBI’s serial crimes unit in homicide and is called to Houston with her partner, J.T. Harper, to take on her first assignment—apprehending the person responsible for these gruesome crimes.
With victims piling up and the clock ticking, Jade and J.T. need to intensify their search because there’s no sign the killer is slowing down.
After a late-night epiphany while she’s alone, Jade suddenly comes face to face with the killer, and now Jade is missing. The clock continues to tick—but this time it’s for her.

About the Author
C.M. Sutter is a crime fiction writer who resides in the Midwest, although she is originally from California.
She is a member of numerous writers’ organizations including, Writers-Online, Fiction for All, Fiction Factor, and Writers etc.
Other than writing crime thrillers, she enjoys spending time with her family and dog. She is an art enthusiast and loves to paint and make hand-made soap. Gardening, hiking, bicycling, and traveling are a few of her favorite pastimes.