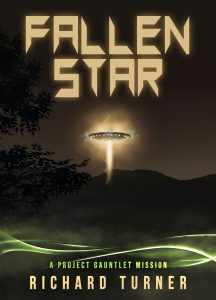 A sudden and brutal attack on a coalition training camp in Iraq wipes out all but two survivors: Captain David Grant and Australian SAS Sergeant James Maclean. Drawn into a clandestine world that deals with unusual encounters the two soldiers volunteer to help with the investigation into an alleged UFO crash in Alaska. The mission, however, is far from simple as it soon becomes apparent that something dangerous is going on and not everyone is as they appear to be.

About the Author
Richard Turner proudly served his country for more than thirty years, all across the globe.

He wanted to try something new and now spends his time writing.

Jasmine’s birthday party ends in disaster. George seems to have lost a phial of highly dangerous liquid. And Fred, well, King Fred is battling politics, relatives and self-seeking dignitaries in his aim to give the people a better management system.

And above all this there is a promise he wants to keep. A promise to an engaging chap he made when he was a mere stripling, when he persuaded that person to stop the Great Energy Drain.

What will happen if he fails?

Princelings Revolution is the final book in the Princelings of the East saga. It’s a tale of heroes and villains, castles and inventions, of bravery and intelligence. And just about all suitable for advanced readers aged ten and up, eight with parental guidance.

END_OF_DOCUMENT_TOKEN_TO_BE_REPLACED

He helped build an evil world.
He betrayed his only son.
But now in another life where nothing is what it seems and against great odds, he has a chance to make things right.
In the 21st century, wars are won in the mind rather than on battlefields. One man – sorcerer disguised as soldier – will forever alter American history with black magic! Major Stacey Truman Keogh is a specialist in psychological operations and a terrorist disguised in military uniform. Both ambitious and evil, he will do anything to further his interests whether sacrificing the operatives under his command, his family and even his only son. In the end, will he discover spiritual redemption and use his immense magical powers in the service of good? Can a grand technological miracle save the son he betrayed so long ago?

END_OF_DOCUMENT_TOKEN_TO_BE_REPLACED

All Peter Baird wants to do is save his brother Martin from himself. All Martin wants to do is spark a second American Revolution. He will provoke the government into declaring war against its own citizens by assassinating the next President on Inauguration Day.

Fearful for his brother’s life, Peter is drawn into the shady world of radicalized militias. He must choose to become part of the plot or risk losing his brother forever. Can he talk his brother down from this insane plan by going along with this scheme, or must he betray Martin to save his country?

About the Author
Michael J. Scott writes fiction that doesn't shy away from hard questions or dicey situations. He treats his characters like real people with real flaws who sometimes do wrong and stupid things–especially when they're trying to do the right thing.

His interests range from the erosion of the American family, socio-political unrest in the U.S. that threatens to break into civil war, UFO's, adventures in Biblical and Christian archaeology, dystopias, sword and sorcery fantasy, to getting inside the mind of a serial killer.

He lives with his family outside of Rochester, New York.

This book is bargain priced from 05/15/2015 until 05/21/2015 Check book price before you buy, as prices can change due to expiration of the sale or other technical issues.

Army canine trainer and handler Jane McMurtry served in Afghanistan with her dog Shadow until an IED blew her legs away. Now, after learning to walk again, alongside a new canine companion, Jane is tracking the scent of kidnapped children in the Colorado high country when her past, her inner turmoil, and her current case collide.

Though Jane thought she’d have to wait two more years, Shadow returns home when he himself suffers injuries. Now two dogs and one woman will struggle to redeem and get on with their lives. In this struggle, Jane partners with a police officer who will make her face the choice between self-loathing and accepting someone’s patient, unconditional love.

This book is bargain priced from 05/09/2015 until 05/16/2015 Check book price before you buy, as prices can change due to expiration of the sale or other technical issues.

3 Unique Storylines. Over 50 Possible Endings. Just one question… Could YOU Solve a Murder?

MURDERED is a mystery novel unlike any other — YOU are the main character. Follow clues, interrogate suspects, and piece together the puzzle before the killer gets away! It’s up to you to solve the case in this action-packed, dark and humorous thriller. Each link represents a choice, and the story evolves based on your decisions.

You’re in a dark alley, a lost tourist in Brazil, when you stumble across a woman’s body and a revolver atop a grisly note which reads, “PICK ME UP.” That’s when you realize you’re not alone….

What starts as an exotic vacation ends up as the opportunity of a lifetime when you inadvertently witness a man fleeing the scene of a murder. Work side-by-side with US Diplomatic Security agents (DSS) and Brazilian Police Officers inside the lawless slums of Rio de Janeiro — but choose wisely, no one is who they truly seem to be.

This book is bargain priced from 03/28/2015 until 04/04/2015 Check book price before you buy, as prices can change due to expiration of the sale or other technical issues.

Thalma Engstrom appears to lead a normal life as the caretaker for a farm owned by her own dummy corporation while secretly tending an underground complex of rooms growing exotic, illegal plants.

Living alone within a labyrinth of secret identities, shell companies, and a network of businesses legal and illicit – making monthly use of the Silk Road 2.0 – Thalma’s only companion is her trustworthy Rottweiler, Socrates.

But a chance meeting with a young man running from the law and an ill-fated attempt to collect on a debt rip apart her newfound normalcy and plunge her into a terrible struggle to save her new love and herself.

Learn more about Lawrence Ambrose
Link To Buy ONE RULE: NO RULE

This book is bargain priced from 02/15/2015 until 03/31/2015 Check book price before you buy, as prices can change due to expiration of the sale or other technical issues.

By 2062, we’ve made a real mess of things. Though engineers, inventors, and business people alike scrambled to develop a solution before we were completely wiped out by an irradiated atmosphere, global warming reduced our inhabited space by half. The chosen solution became a temporary fix at best as it was burdened by the weight of unchecked population growth.

With our workplace neutered by the Genderless Act, frustration grew and we came to embrace trystrooms where anything goes, everything is enjoyed, and it’s all kept secret by the Privacy Act.

Today, innovation and businesses thrive in an environment where unemployment and poverty have been eliminated, due largely to the Government Reorganization and Realignment Effort and business fostered by the GRRE enables one group of brilliant young designers to reclaim some of the ever-shrinking space—but bringing it to market exposes manipulation and corruption on a devastating, worldwide scale.

To find justice for those he loved, a man finds himself at the center of a dangerous global conspiracy…

When Jon Sommers finds out his fiancé Lisa Gabriel died in a terrorist bomb attack, he is visited by spymaster, Yigdal Ben-Levy, who throws Jon’s life into chaos, when he tells him that Lisa was not a fellow graduate student but a Mossad spy sent to bring him to Israel. Ben-Levy convinces Jon to seek justice for Lisa’s murder by joining Mossad and going after Tariq Houmaz, her killer.

Shortly after training, Jon’s entire new team is executed by the bomb maker, who murdered Lisa, and only Jon escapes the massacre. As he leaves the scene, Jon finds himself captured, threatened and turned into a double agent for MI-6. When his Mossad handler, Ben-Levy learns this, he wants Jon dead as an example to other Israeli coverts.

If being a hunted double agent isn’t enough, Jon comes across information in his spying for MI-6 that suggests Israel is in impending danger from Houmaz. To stop this catastrophe, Jon must put together his own team, one he can trust with his life. Can Jon bring justice to Lisa’s murderer, or will millions of lives be lost?