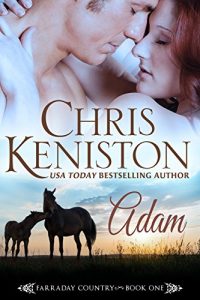 On a barren road in the pre-dawn hours, Adam Farraday, the oldest of seven siblings, happens upon a disabled sports car and an angel in white searching for a disappearing dog. What is it about this secretive redheaded beauty that intrigues him as no woman has before?

After learning her fiancé’s true nature minutes before her wedding, Meg O’Brien drives as fast and as far away from her world as she can. Stranded with no money, and nowhere to go, the city girl must learn to fit in to small town life and all its quirky trappings. Too bad falling in love with her handsome rescuer is not an option.

About the Author
Author of more than a dozen contemporary novels, including the award-winning Champagne Sisterhood, USA Today bestselling author Chris Keniston lives in suburban Dallas with her husband, two human children, and two canine children. Though she loves her puppies equally, she admits being especially attached to her German shepherd rescue. After all, even dogs deserve a happily ever after.

This book is bargain priced from 06/19/2015 until 06/30/2032 Check book price before you buy, as prices can change due to expiration of the sale or other technical issues.

Confirmed bachelor, Cole Baxter, finds himself raising his sister’s four young children. After one week of leaving his ranch in the hands of his foreman to take care of the grieving, needy children, he has to admit the task is beyond him and he needs help. But hired help won’t suffice: those children need a mother’s hand. Cole needs a wife.

Link To Buy I Love Thee

This book is bargain priced from 06/01/2015 until 06/06/2015 Check book price before you buy, as prices can change due to expiration of the sale or other technical issues.

Australian cowgirl Bridie Willis travels to Montana to escape the pain of losing her father. Headstrong and determined, she plans to spend the summer alone photographing wild animals. Instead she finds herself saddled with a stubborn cowboy as a back-country guide.

Ethan Morgan has been shaped by a childhood spent on the run. Cautious, steady and conservative, he is tasked with ensuring the beautiful, risk taking cowgirl doesn’t ditch him or come to any harm.

But the biggest challenge Ethan must face is to accept how Bridie makes him feel. And the biggest risk Bridie must take is to trust in her heart.

This book is bargain priced from 05/19/2015 until 05/21/2015 Check book price before you buy, as prices can change due to expiration of the sale or other technical issues.

This book is bargain priced from 04/24/2015 until 01/22/2016 Check book price before you buy, as prices can change due to expiration of the sale or other technical issues.

It is 1846 and Sarah Harlan is just thirteen when she sets out with her family on the great trek West to California. Confident and assured beyond her years, schooled and shaped by the Father she adores, Sarah believes life has little more to teach her. But this is a journey like no other. In crossing a Continent they must face all Nature can unleash upon them; tempests and floods; raging rivers and scorching deserts; disease and starvation.

To face these challenges and overcome them, Sarah must also take her own journey of discovery. Encouraged by her cousin Nathan, she must look within and find the truth of who she wishes to be, of who she must be.

Before her long journey is through her strength and resolve will be tested beyond endurance as, above and beyond the torments of the road before them, their small group must face the cruelty and corruption of their fellow travellers. A disagreement between two groups that will fester and grow; a poison that will cast a shadow across their path, until one last bloody confrontation high in the Sierra Nevada mountains.

. . . but to Emma it is a desert prison in the middle of a hostile and dusty prairie. Emma had hoped to go to Vassar College, to pursue her dreams of becoming a botanical illustrator. But when her father, struck with “Western fever” moves the family out West, Emma’s dreams are shattered. Her only consolation is that her childhood friend, handsome Randall Turnbull, has moved to Greeley to work for his railroad baron father. Her heart sparked by his comforting presence, she hopes Randall will fall in love with her and marry her.

. . . as Lucas Rawlings, veterinarian and horse lover, well knows. Lucas has lived on the Front Range for three years at Sarah Banks’s horse ranch, after stumbling down from the Rockies consumed with grief. Since losing his precious wife and baby in childbirth, he doesn’t think his heart can bear ever loving again. But Sarah, a half-Cheyenne with a medicine woman for a grandmother, has a vision showing it’s time Lucas married again. He scoffs until he rescues Emma in a sudden hailstorm and their lives become intricately entwined.

Emma must choose—and fight—for the man she loves, at the risk of all she loves . . .

Emma yearns for the comfort and familiarity of Randall’s company, but Lucas’s easy confidence and gentle ways snag her heart. Facing a new life beset by grasshoppers, drought, and blizzards is hard enough. But when murderous ranchers try to force Sarah off her land, and her brother takes up dangerous company, the lives of her family and the man she’s come to love are threatened. It will take a miracle—and the strength and promises of true love—to come through unscathed in this untamed land.

Speech therapist, Trinity Redfern, knows her perfect match is out there somewhere. And when she finds him he’ll be articulate, well-dressed and most of all he will let her call the shots.

Reclusive rancher, Zane Nash, has heeded life’s lessons. Never trust anyone, especially a woman. But when he becomes an instant father to five-year-old Finn, he must trust the sassy speech therapist who takes over his ranch for the summer. Trinity is Finn’s last hope to learn to speak again.

But when the summer ends has time run out not only for Finn but also for Zane? Can the reserved cowboy find the words to make strong-willed Trinity stay … forever.

A short and sweet retelling of the beloved Cinderella story set on the Montana prairies.

Life on her brother’s ranch is lonely for Ellie Strickland. Ed’s ungracious manners and tight-fisted habits keep visitors away and his mother and sister close to home. But when Cole Newcomb, son of the wealthiest rancher in the county, meets Ellie by chance, he is struck by an unexpected impulse to rescue her from her solitude–and Ellie’s lonely summer is transformed.

When Cole asks her to go with him to the Fourth of July dance, Ellie is determined that nothing, from an old dress to Ed’s sour temper, will stand in her way. By the time the Fourth of July fireworks go off at midnight, will they herald only more heartache, or maybe–just maybe–a dream come true?

“‘Corral Nocturne’ is a truly sweet Western romance novella, with a few cleverly added nods at the fairy tale of Cinderella, but remaining very much its own tender tale.” ~ Amber Stokes, author of The Heart’s Spring series

“Foley knows her stuff and writes it effortlessly…her gentle descriptions…show me the beauty of the West and the tenacity of its people…If you enjoy a quiet, gentle romance by the rose-purple light of a prairie dusk, read ‘Corral Nocturne.'” ~ Rachel Heffington, author of “Fly Away Home”

Mia Zabrinski’s lost enough– her marriage. Her job. Her body image. Mia is ready to rebuild her life in her hometown of Marietta,Montana, and she’s damned if she’ll let some stranger camp on her land and claim squatter’s rights.

Ryker Bensen doesn’t have much– and that suits him fine. Less than a year ago, he had everything: a beautiful girlfriend, a baby on the way, a career that earned him fame and a very comfortable living…until he didn’t. When beautiful Mia shows up and orders him off what she says is her land, Ryker realizes she might be the spark he needed to jumpstart his interest in living again.

1875 ~ Beset by a sudden spring storm on the Front Range, newlywed Grace Cunningham watches in horror as her husband, Monty, is swept downriver. Pregnant and despairing, she stumbles into Fort Collins and tries to make a life for herself, praying that one day the man she loves will walk into town and back into her life.

Montgomery Cunningham wakens on the bank of a river with no recollection of who he is or how he got the gash on his head. A woman named Stella, who claims to be his fiancée, nurses him back to health. Plagued by images of a faceless woman who he is certain is the key to his past, Monty concedes to Stella’s pressure to marry him and move to Fort Collins, but he quickly regrets his actions.

A year after Grace’s tragic loss, Monty walks into the dress shop where she works—with a woman on his arm. Shocked that Monty has no recollection of her, Grace is determined to win back his heart. Somehow she must help him regain his memories and his buried love for her—and not just for her sake but for the sake of their infant son, Ben.

Monty, miserable in his marriage to a woman he hardly knows, is inexplicably drawn to Grace. Every time he’s near her, memories surface, but they are hazy and troubling. He’s torn between his vows and the desires of his heart, for he cannot stay away from Grace.

Grace’s hope is sparked when Monty starts recalling glimpses of his past. But when murderous outlaws come to town, she is thrust into grave danger. Monty risks his life to rescue her, only to face even greater perils in the treacherous mountains. Can she truly hang on to hope when she is about to lose all she loves?

This new full-length Historical Western Romance novel takes readers on a heart-wrenching journey of love, loss, and hope amid the dangers and challenges in Colorado Territory’s wild frontier.