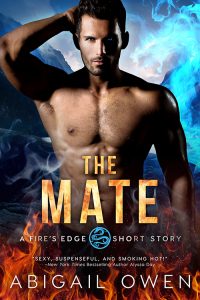 Maddie Thompson’s life just fell down a rabbit hole. Finding out she’s a dragon shifter was one thing—she never quite fit into the human world, and this new reality feels…strangely right. However, discovering the next step is to choose a mate, and if she chooses wrong she’ll die, is the other side of crazy. Especially when she already left a piece of her heart with someone who didn’t want it.

To say dragon enforcer Fallon Conleth was shocked when the Mating Council summoned him as a potential mate for a newly found dragon doesn’t quite cover it. A mate is rare and precious and many dragons never find theirs. Fallon isn’t sure he’s worthy of the honor, not when so many deserve it more. He’ll just go through the motions and return home alone…until he sees Maddie. The human woman he reluctantly let walk away.

Fallon already broke Maddie’s heart once, but if he can’t convince her that they’re meant to be, she’ll die… and he won’t be far behind.

About the Author
Abigail grew up consuming books and exploring the world through her writing. She attempted to find a practical career related to her favorite pastime by earning a degree in English Rhetoric (Technical Writing). However, she swiftly discovered that writing without imagination is not nearly as fun as writing with it. No matter the genre, she loves to write feisty heroines, sexy heroes who deserve them, and a cast of lovable characters to surround them (and maybe get their own stories). Abigail currently resides in Austin, Texas, with her own personal hero (who she totally married!) and their two children, who are growing up way too fast.

As soon as she had seen the ad for an elementary schoolteacher in Riverton, Colorado, Ally Stephens had felt a pull to the shifter town. She moved to the small town–and promptly lost her heart to the town’s sheriff, a gruff bear shifter who had no use for a mate.

Bear shifter Jagger Houston was a loner by nature, both as a man and a bear. He tried to convince himself—and his bear—that was all he was feeling for the curvy chocolate-haired schoolteacher who had come to town. It didn’t matter how good she tasted or how sweet she looked, neither he nor his bear wanted to be tied to someone for the rest of their lives.

Link To Buy Her Holiday Bear on Amazon