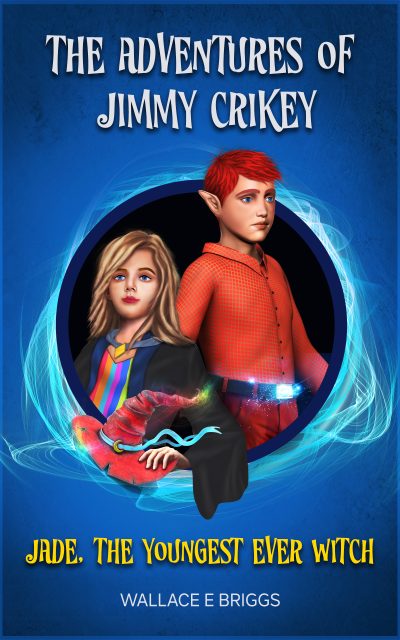 The Adventures of Jimmy Crikey: Jade the Youngest Ever Witch by Wallace Briggs

The Adventures of Jimmy Crikey: Jade, the Youngest Ever Witch is the fifth stand alone adventure in the series of Jimmy Crikey’s adventure stories.
Jimmy is the alien orphan who, despite being bullied, chose to make his home on Earth and grew into a hero who overcomes every challenge place in his path.
Jimmy’s close friend Jade approaches the end of her apprenticeship with Matilda as a witch.
There are several challenges to complete before she can graduate as a fully qualified member of the sister’s Coven. Matilda is head of the four guardian witches of Earth’s realms. But she has been called to move to a higher level. Who will be appointed as her successor?
Jimmy is told not to help Jade directly. She must succeed in the trials using only her skills.
When collapsing roofs threaten the cave world of Lithnia, both Jimmy and Jade’s skills are needed to save Lithnia from the giant, rock-chewing beatles who originated in Egypt as scarabs.
The Sky Islands have been caught in tornado winds and a whirlwind. It is tearing the islands apart, and Matilda instructs Jade to go to their aid. Jimmy is forbidden from interfering, but he does help Jade to carry out her plan to save the Islanders. Can the youngest witch overcome the danger?
Madam Cleoptra who rules the Sky Islands and has given birth to The Weatherman’s ,aka Lord Oron’s, son, Uran and he must be introduced to the Coven of sister witches.
The dreaded Giant Scarabs return to their destructive chewing of rocks which threatens Roombelow, far away from Lithnia.
Jimmy and Jade trace the beatles resting place to a floating island in the Arctic seas, where the Centaurians, a race from planet Xe, in the Alpha Centauri system, are seeking diamonites from Lithnia to protect their planet from gamma rays being emitted by one of their suns. To save their planet they would risk destroying Earth. Jimmy employs XRU, his talkative starship’s navigator to help the aliens,

END_OF_DOCUMENT_TOKEN_TO_BE_REPLACED 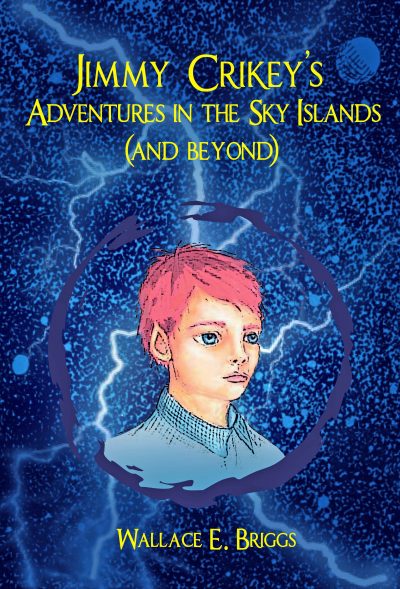 Jimmy Crikey’s Adventures in the Sky Islands by Wallace Briggs

Jimmy Crikey’s Adventures in the Sky Islands
This stand-alone story is the second in the series of Jimmy Crikey’s adventures.
Jimmy Crikey is the orphan alien brought up by a loving lady who lived on the edge of the forest close to Esh Village.
Once bullied beyond endurance because of his strange appearance, Jimmy ran away, searching for a place where he could fit in. He found himself in the town of Roombelow, where Jimmy developed his abilities to protect his new home from the dangers that threatened. Jimmy chose to remain on Earth with his new family of friends, which included Gemma, the little lady he found at the bottom of the well but didn’t know how she got there. The four witch guardians became an integral part of his life, as did Lord Oron, the Weatherman who roamed the world in his cloud.
Far above Earth, a war-like, galactic race of Zyrons invade the Sky Islands.
END_OF_DOCUMENT_TOKEN_TO_BE_REPLACED