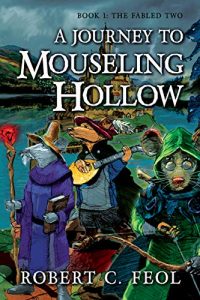 While his subjects in The Far Collective love and admire the good King Teegan, only a trusted few are privy to the King’s greatest secret: that highly intelligent, talking mice exist…and 20 seasons ago, they saved the Kingdom of Feldenspar in its darkest hour! When the Mouselings first discovered the mysterious Decoding Stones, they learned the secret of communication between humans and animals, and formed a bond with the royal line of Teegan that has elevated both Mouselings and humans alike. That alliance proved pivotal when the nefarious Rat King, a dark sorcerer able to bend humans to his will, invaded the land of Feldenspar with his terrible, fell legions…yet, against all odds, was narrowly defeated through the heroism of two fabled Mouseling warriors whose names have since been lost to time and legend.

20 seasons later, on a quiet autumn day, the Mouseling Innkeeper Robert Teague, owner and proprietor of The Sleeping Cat Inn and Tavern nestled in the peaceful hamlet of Mouseling Hollow, has his life turned upside down when a strange hooded figure strolls into his tavern and hands him a mysterious summons—a summons which will thrust him involuntarily back into the crucible of combat he thought he’d sworn off forever…while forcing him to unravel a mystery which just may hold the key to the future of the entire Far Collective. With a new menace rising, threatening to taint and overrun The Western Lands, the hearts and paws of a few tiny Mouselings may be all that stand between the forces of darkness and the total subjugation of The Far Collective.

‘The finest piece of high fantasy writing I’ve ever had the privilege to edit.’

Considered a “visionary” by many of his clients and radio show listeners, Feol’s innate ability to locate highly discounted investing opportunities and get them online has resulted in him being involved in over 2,000 purchase and sale transactions over the past twelve years—a phenomenal accomplishment for someone who is just for-ty-four years old. In 2009, Robert created and trademarked through the United States Patent Office “The Short-Term Retirement Program” (www.ShortTermRetirement.com), a ground-breaking real estate purchase system that allows any investor, regardless of nationality, to take advantage of private financing and aggressive amortizations to build a strong real estate portfolio and have it paid off in as little as five years.