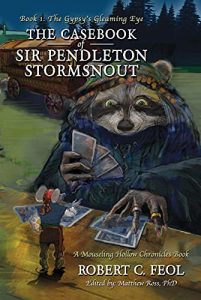 So reads the sign that hangs by the entrance of the palatial estate that lies on the outskirts of the sleepy hamlet known as Mouseling Hollow. For most mice, hanging such a sign outside their place of business would be sheer arrogance – a sure sign that they were either puffed-up braggarts intoxicated with their own boastfulness, or vainglorious charlatans seeking to separate the innocent from their hard-earned coin.

But Pendleton Stormsnout is most certainly not ‘most mice.’ Far from it…

For Pendleton Stormsnout, the sign that hangs outside his stately manor house is merely a simple declaration of fact – for he is both a legendary detective, and a lifelong seeker of adventure. Over the course of many seasons, the tales of his exploits have spread far and wide throughout the entirety of King Teegan’s Far Collective. The rumors say that Pendleton Stormsnout is a prodigy – a virtuoso – a ‘renaissance mouse’ in the truest sense of the phrase. They say that his powers of observation and deduction are unparalleled. That he can out-think the most distinguished scholars from the University at Old Town, out-fight the greatest champions from the Black Baron’s infamous Arena, and out-drink the thirstiest scalawags in Captain Redfur Tumblefox’s fabled Wrecking Crew. Some even whisper that he sets a finer dinner table than his neighbor, the beloved chef and innkeeper Robert Teague.

When The Feldenspar Daily is granted a rare interview with the famous detective, it quickly dispatches a pair of journalists eager to learn the truth about Sir Pendleton Stormsnout. Is he really as sharp as they say? As learned? As daring? As sophisticated? Being no stranger to news stories that have been a bit…shall we say…exaggerated, the journalists arrive at his doorstep with two questions burning on their lips: has Sir Pendleton Stormsnout really done all the things he’s said to have done? And if so, what is the source of all his amazing abilities – how did he become the celebrated mouse that he is today?

As they question Stormsnout’s butler (and chronicler of sorts) Alfred, they will discover that the answers to their questions are both much greater – and far different – than they ever could have imagined…

Discover the answers for yourself in this, the first novella in the new Mouseling Hollow Chronicles series – featuring the origin story of Sir Pendleton Stormsnout, the breakout hit character from the internationally best-selling A Journey to Mouseling Hollow series!

About the Author
International speaker, author, and radio personality Robert Feol is considered by many to be one of the youngest, most up-and-coming real estate investors and motivational speakers in the real estate industry today.
Feol’s maverick approach to real estate acquisition and financing and uncompromising attitude towards integrity and full disclosure based method of real estate investing has earned him numerous accolades, including having New York Times best selling real estate author Robert Shemin stating that Robert’s radio program is “the best real estate investing radio program in the United States.”
Considered a “visionary” by many of his clients and radio show listeners, Feol’s innate ability to locate highly discounted investing opportunities and get them online has resulted in him being involved in over 2,000 purchase and sale transactions over the past twelve years—a phenomenal accomplishment for someone who is just for-ty-four years old. In 2009, Robert created and trademarked through the United States Patent Office “The Short-Term Retirement Program” (www.ShortTermRetirement.com), a ground-breaking real estate purchase system that allows any investor, regardless of nationality, to take advantage of private financing and aggressive amortizations to build a strong real estate portfolio and have it paid off in as little as five years.