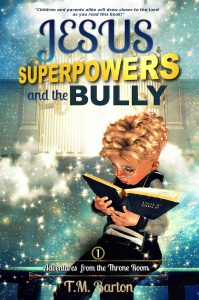 “How can I get superpowers?”

Brock, a new kid in Troy’s 5th grade class, bullies him at every turn. Troy doesn’t know what to do. It wasn’t his fault, after all, that he was born with only part of an arm. If that weren’t enough, he’s struggling in math and forced to work with Brock to improve.

When Troy prays, asking Jesus into his heart, he is taken directly to the throne room of God and receives superpowers. Jesus says he can’t use his superpowers on people, so how is he supposed to handle the bully in class? How does he handle the demons that start appearing after Jesus gives him special glasses?

Get ready for an exciting ride as Troy discovers superpowers, miracles, angels, and the love of God while learning who he is in Christ and maneuvering the challenges with Brock at school.

Today could be the day that your life changes forever…

Teenage twins James and Samantha Blake are caught up in a seemingly random terrorist bombing while on a school trip. Many of their friends are killed. When the twins wake up in hospital, their lives have changed forever.

The doctors are amazed at the speed with which James and Sam recover from their injuries and, when the twins begin to exhibit extraordinary powers, it is obvious that something incredible has happened.

As James and Sam attempt to overcome their fears and embrace their new abilities, a series of murders and disappearances start plaguing the hospital. The twins aren’t the only ones with special abilities and it becomes apparent that someone is coming for them.

Will James and Sam be able to survive the nightmare into which they have been plunged? Who, or what, is behind the murders at the hospital? And was that terrorist incident quite so random after all?

About the Author
I began writing the first Class Heroes book on my laptop in February 2011, but these stories have probably been continually playing in my head since I was aged five or six, when I would act them out with toys and with my friends. I then branched out into using pencils, colouring pens and paper, moving on to writing pads and then my first computer.

So, as you’ve probably gathered, I have always enjoyed making up stories and the superhero genre has been one of my favourites.

I like to give my readers free ‘extras’ when they buy my books. The Class Heroes novels include bonus material, which I liken to the special features that are included on DVDs.

A Class Apart features the fictional news organization 24/7 Interactive News. In the opening scene of the book, the main character – Samantha Blake – is reading a news story on the 24/7 website, about the events that she is caught up in.
You’ll find news reports and videos, which act as teasers and prequels for events in the books. Hope you enjoy them!