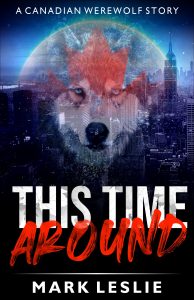 GETTING CAUGHT BETWEEN THE MOON AND NEW YORK CITY ISN’T AS ROMANTIC AS THE SONG MAKES IT SOUND.

That’s because being a werewolf isn’t all about howling at the moon. Or running carelessly through boundless fields feeling the wind in your fur.

Not when you live in the most populous city in the US.

For Michael Andrews, a Canadian living in Manhattan and afflicted with lycanthropy, there are odd side effects to being a werewolf in the middle of a bustling metropolis.

Such as waking up naked in Battery Park with absolutely no memory of the night before as a wolf and trying to figure out why there is a bullet hole in his leg.

Just another day in the life of a man living with the odd side effect of his werewolf affliction.

About the Author
Mark Leslie would be the first person to admit he's still afraid of the monster under his bed. His dark fiction is often compared to "Twilight Zone" or "Black Mirror" in terms of style, exploring "what if" themes with contemporary settings that include speculative elements, gently skipping around the genres of sci-fi, horror and urban fantasy. When he is not writing, or reading, he can often be found wandering, awestruck, through bookstores, libraries, and craft beer breweries.

Once bullied to the brink of suicide, 16 year-old Adam Reaper discovers extraordinary powers within himself. As the ungovernable changes within unleash a burning hatred for all who once wronged him, Adam is faced with choosing between using his gifts to save the world from impending doom or to take vengeance against his enemies.

For a time, Monica, the love of Adam’s life, is able to keep the newfound darkness in his heart at bay, but tragedy strikes when Adam’s older brother, PJ, is murdered after insidious forces give rise to a formidable domestic terror cell known as The Strangers.

As he pursues his brother’s killers, Adam and his friends, Howie and Ace, find themselves thrust into an unthinkable conflict that could ultimately lead to the destruction of the world. As Adam storms farther away from Monica and deeper down the dark path of revenge, the edges of his own darkness begin to fade once again.

About the Author
A. King Bradley grew up in a tiny town in southwest Georgia. As a child, he would often turn to reading and art instead of wrestling his six siblings for control of their household's lone television. What started as an alternate form of entertainment soon became his passion as he developed a powerful love for storytelling.

Martin Rigsby is a long-time Federation navy captain of an outdated star carrier looking forward to retirement when he receives a distress signal from a human planet near the edge of the Milky Way galaxy. He finds a planet in ruins, under assault from an ancient enemy of mankind, the Krai’kesh. He must use every trick in the book to try to contain the emergence of this new enemy and prevent the utter destruction of humanity.

Emergence is the first in a new science fiction series set in the Saga of the Seven Stars fantasy universe. It is a science fantasy/space opera book featuring high technology, fighter pilots, marines and intelligence officers, along with manipulation of matter and energy, gravity and so much more.

Buy Emergence now to journey beyond Earth to the far side of our galaxy.

A dynamite first book that introduces the world of Eden’s Ore: an energy starved dystopian Earth that discovers a new form of energy. A magical ore that has the power to destroy or transform the world. As the world fights for control of it, an anomaly within the population discover a strange connection to the ore, unlocking supernatural abilities within them. Gabriel Roberts is one of them.

A piece of the coveted ore is punched into his chest during a horrific storm that destroys his family’s ranch. Panicked Gabriel unleashes a massive explosion from the ore in his chest, the ore power surging through his body. Unsure of what is happening to himself, Gabriel’s world spins out of control as he discovers a hidden war, raging behind the scenes. As Gabriel learns about the true nature of the ore bonded to his chest, he is forced to choose a side. A decision that will shape the course of humanity.

About the Author
B.V. Bayly is an exciting up and coming new author on the science fiction scene. Bayly was mentored under New York Times bestseller Kathy Tyers, who penned Star wars: The Truce at Bakura and Star wars The Jedi Order: The Balance Point, as well as her famous Firebird series. Bayly’s writing is a mix of comic book action and science fiction. His series is edited by Mary Rosenblum, another big science fiction name and Hugo finalist from the United States. Bayly’s series Eden’s Ore hit the market as a huge surprise last year. The first book in the series, Eden’s Ore: Secrets, thrilled both readers and reviewers in the UK and across North America.

In 2023 the Singularity will arrive.

Biotechnology, nanotechnology, Artificial Intelligence, and a myriad of other technologies will advance and merge. Mankind’s scientific powers will advance exponentially and blindness, paralysis, and nearly every other disability will be eliminated. Mankind will rejoice in their accomplishment and look forward to a golden era of peace and compassion.

But the dark side of humanity cannot resist the temptations that singularity technology offers, and rogue nations begin a series of dangerous experiments.

Soon the world is in chaos, with vicious human-animal hybrids, cybernetic soldiers, and out of control nanotech running wild. Hundreds of thousands of people die and millions are threatened. Then the Embodied appear. Birthed from the darkest underside of singularity technology, they have given up their humanity to become living technology and seek the total domination over humanity. Nations fall, armies are crushed, and their first attack on America leaves its infrastructure in ruins.

But then everything changes.

A young girl is caught up in the attacks, and a man with powers beyond our comprehention refuses to let her die. Unleashing superhuman abilities unlike anything the world has ever seen, he rescues her from certain death, shocks the world, upsets the balance of global powers, and makes himself the sworn enemy of the Embodied.

This is the story of that man… the first real superhero.

About the Author
Jason is in his early forties, and lives very near to the small town he has based many of his stories in. He has a very patient wife, two daughters, and one very neurotic little dog.

The Quantum Mechanic saga spans across four books, with a fifth due for release in November of 2015

Pax is a teen-age genius who learned to contact the astral plane and communicate with a being who lives there.

So when Pax’s astral mentor offers him a chance at life and power greater than any human has ever possessed, in exchange for helping the astrals inspect Earth, Pax jumps at the chance.

What happens next sets off a series of events that change Pax and his friend Scarlett forever…  Partly because the astral beings have their own agendas, and for some of them, mankind’s survival means very little.

And they’re not even the biggest threat…

Link To Buy I Am Titanium on Amazon

This book is bargain priced from 05/10/2015 until 05/17/2015 Check book price before you buy, as prices can change due to expiration of the sale or other technical issues.

Life’s script takes Chris Byrne from a passive tech support role to an active world saver.
A simple drudging existence was on tap for Chris before an attempt at bravery places him as a sidekick for newly discovered superheroes.
With government backing, Chris awkwardly attempts to live up to the heroic image while tagging along on Super missions. Although he may look it and proves slightly capable, Chris knows he can’t keep up the part and decides to quit.
But walking away is the most daring performance in front of him. He stands to lose financial security for his family, a best friend that is also playing sidekick, and a new friend in the form of a Super. Then Chris sees the machinations behind it all.