What if you have to survive undercover in a hostile land?
A single slip can lead to arrest, torture, execution. Who can be trusted? Discover what kept Churchill’s secret saboteurs alive in occupied France, Holland or Thailand – or didn’t!
‘A fascinating and important study of a long-hidden corner of SOE history.’ Dr Roderick Bailey, Pembroke College, Oxford, Advisor to BBC TV series ‘Secret Agent Selection: WW2’.
The men and women who served as agents of the World War 2 Special Operations Executive were courageous. But courage was not enough. They also needed to learn the caution and suspicion that might just keep them alive, deep undercover in enemy territory.
Guardians of Churchill’s Secret Army tells the stories of the extraordinary men who taught them those skills and thought processes. They helped trainee agents learn how to seem innocuous while preparing resistance, subversion and sabotage. Each spoke several languages. Many became agents themselves and faced danger with great bravery; that’s part of their story too. All played a crucial role in the global effort to undermine the enemy.
We find them not only in the Baker Street Headquarters of SOE, but also in night parachute drops, in paramilitary training in the remotest depths of Scotland and in undercover agent training in isolated English country houses. We follow them to occupied France, to Malaya and Thailand under threat of Japanese invasion, to Italy and Germany as they play their part in the collapse of the Axis regimes. Their stories are inspiring.
If you like discovering the true stories that underpin the history of the Second World War, then you’ll want to read this authentic book. Author of Setting the Med Ablaze, Dr Peter Dixon has a PhD from the University of Cambridge and four decades of military and peacebuilding experience. In the tradition of Antony Beevor and Ben Macintyre, he shines a spotlight on a crucial area of the Special Operations Executive.

What Inspired You to Write Your Book?
Many books have been written about the men and women of the Special Operations Executive, but the story of these men was a little-known aspect of World War 2 history.

END_OF_DOCUMENT_TOKEN_TO_BE_REPLACED

Darren Mathews, a former Australian SAS super soldier, is a loving father married to his soulmate, Anna Mathews. They are both devoted parents, living with their daughter, Dana, on a small island off the coast of Florida. They seem to have the perfect family life, but they are hiding a dangerous secret: they both work for the Orange Corporation, an umbrella company of the CIA controlled by the shadow government. From aliens to giants, they have seen all that the Hidden Hand has kept from the world. Almost.

When a routine recovery mission puts Darren face-to-face with original Tesla documents, he makes an impulsive decision which will alter the course of not only his own fate but the fates of his wife and daughter forever. What will Darren do with the Tesla notes and diagrams? Will the shadow government discover what he has done? And will Anna turn her husband over to the Hidden Hand, or will she stick with him for better or worse—until death do they part?

END_OF_DOCUMENT_TOKEN_TO_BE_REPLACED 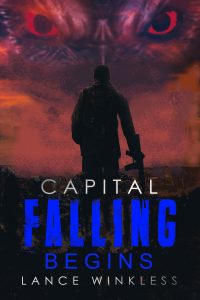 The Zombie Apocalypse has erupted in London – But how?

Find the answers in Capital Falling – Begins, the thrilling prequal to the Capital Falling series. This free short story tells of the events that led the horrific apocalypse that threatens to destroy London.

There are no catches, the book is totally free, you don’t even require an email address. More info at www.LanceWinkless.com. Enjoy

About the Author
Lance Winkless was born in Sutton Coldfield, England, brought up in Plymouth, Devon and now lives in Staffordshire with his partner and daughter. He is a member of The Society of Authors.

Rolling Thunder is an historical novel about the decisive role politics played during the Vietnam war. Its characters range from men in the field to the Pentagon and the White House. Fighter pilots and Special Forces warriors try to do their best but are hampered by President Johnson, Secretary of Defense McNamara, and their staff members who despise the military. Only one aging USAF general, who fought in Korea and WWII, is on their side. His clashes with his Commander in Chief, Lyndon Johnson, are epic in proportion and startling in content.
Four airline stewardesses fly the civilian contract flights that bring American soldiers to and from the war zone in Vietnam have difficult love affairs with G.I.s and fighter pilots. After one flight they come under attack while on an airbase.
Through their eyes, and those of many others — pilots, soldiers, lovers, enemy agents, commanders, politicians, profiteers — Rolling Thunder shows us Vietnam as few other books have, or can. Berent captures all the intensity and drama of that searing war, and more, penetrates to the heart and soul of those who fought it. Rolling Thunder rings with authenticity.

About the Author
Mark Berent is admirably suited to have written his historical fiction five-book Vietnam Wings of War series for he lived each story. He served four years and one day in the Vietnam War during the period from November 1965 until August 1973.
When asked why he kept going back, he replied: “A lot of reasons; because it was there, because I wanted a MiG, because when the threat goes up the paperwork goes down and the weinies run for cover, but mostly because the guys were still fighting. Everyday I’d pick up a paper and find another buddy KIA, MIA, or POW. I just couldn’t stay on the beach.”
Now he writes about these men. He has five books in print and Ebooks; Rolling Thunder, Steel Tiger, Phantom Leader, Eagle Station, and Storm Flight. Although historical fiction, the books are about the men and women who gave everything they had in a war they weren’t allowed to win. FAC pilots, Phantom crews, Thud, Hun, and Buff crews, gunship pilots and gunners, green berets, grunts, carrier jocks, MAC contract stews, boomers and tankers, from corporals to colonels; the whole nine yards about the day-to-day heroism and heros we all know and loved . . . and some we hated. By way of contrast, LBJ in the Oval Office and McNamara in the Pentagon E Ring are included and the words they spoke as they picked strike targets over lunch are included in great detail, yes indeed. As are those of Jane Fonda and Tom Hayden.