Rhapsody and Rebellion by Aubrey Wynne

An ancient Scottish legacy… A political rebellion… Two hearts destined to meet…
Raised in his father’s image, the Earl of Stanfeld is practical and disciplined. There are no gray lines interrupting the Gideon’s black and white world. Until his mother has a dream and begs to return to her Highland home.

Alisabeth was betrothed from the cradle. At seventeen, she marries her best friend and finds happiness if not passion. In less than a year, she’s a widow. Vowing to honor her husband’s memory, she joins his group of Glasgow weavers and is soon embroiled in the Radical War of 1820.

Crossing the border into Scotland, Gideon finds his predictable world turned upside down. Folklore, legend, and political unrest intertwine with an unexpected attraction to a feisty Highland beauty. But Lissie doesn’t trust the Englishman or the rising desire between them. When the earl learns of an English plot to stir the Scots into rebellion, he must choose his country or save the clan and the woman who stirs his soul.

END_OF_DOCUMENT_TOKEN_TO_BE_REPLACED 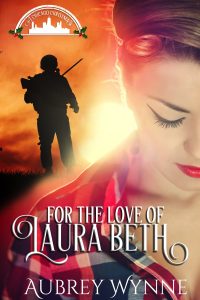 For the Love of Laura Beth by Aubrey Wynne

The Korean War destroyed their plans, but the battle at home may shatter their hearts…
Laura Beth Walters fell in love with Joe McCall when she was six years old. Now she is counting the days until Joey graduates from college so they can marry and begin their life together. But the Korean War rips their neatly laid plans to shreds. Instead of a college fraternity, Joey joins a platoon. Laura Beth trades a traditional wedding for a quick trip to the courthouse.

The couple endure the hardship of separation, but the true battle is faced when Joey returns from the war. Their marriage is soon tested beyond endurance. Laura must find a way to accept the tragedy thrown in their path or lose the love that has kept them anchored for so long. With a determination that only comes from the heart, Joe relentlessly fights an invisible enemy…for the love of Laura Beth.