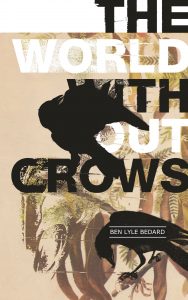 In celebration of its One Year Anniversary, “The World Without Crows” is on sale for 99 cents!

In 1990, the world ended. A disease turned people into walking shells of themselves. Zombies. Most of them were harmless, but some were broken by the pressure of the disease. The cracked became ravenous killers whose bite infected.

To escape the apocalypse, Eric, a young, overweight boy of 16, sets off on a journey across the United States. His plan is to hike from Ohio to an island in Maine, far from the ruins of cities, where the lake and the fierce winters will protect him from both Zombies and the gangs that roam the country.

Along the way, Eric finds friends and enemies, hope and despair, love and hatred. The World Without Crows is the story of what he must become to survive.

For him and the people he would come to love, the end is only the beginning.

Link To Buy The World Without Crows on Amazon

Eight years ago the December Plague swept through the human population of earth. The Infected were driven mad by the disease, becoming violent and cannibalistic, killing even those closest to them without hesitation.

Six years ago, the tiny surviving community of Immune humans found a cure, and the Infected began to wake up and realize what they’d done. And what had been done to them.

Over time, society began to rebuild itself. Now it is ready to judge those responsible for the Plague. Nella Rider, the court psychologist and Frank Courtlen a defense attorney are trying to establish the truth. But more depends on it than they know. They race to find the answers they need before the fragile remains of humanity vanish for good.

About the Author
Deirdre Gould lives in Central Maine with her three children and husband. She's also resided in northern Idaho, coastal Virginia and central Pennsylvania, but all of them just led her back home.The winters sure are cold, but that just means the zombies run slower. The area is isolated, but that just means the apocalyptic diseases don't spread as quickly. And the storms are bad enough that no one thinks you're crazy for "prepping." It's kind of ideal for a post-apocalypse writer when you think about it.