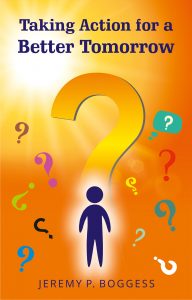 In our world today there are monumental and exponential changes occurring. These changes are happening not just in the local, international, and global arenas, but even within ourselves. Looking at ourselves, our governments, our societies, humanity, and the world in general, many questions and concerns may come to mind. Let us explore these, and discuss our responsibilities and the necessary actions that will help guide us into our future. It is important to look beyond isolationism or globalization. There are many different contributing factors to our immediate surroundings, the cultures we live in, and the changing situations that all humanity shares. And there are also many different forms of cause and effect at work. We must examine all of humanity, from the various cultures and subcultures that exist to our individual selves. The purpose of this book is to have you ask a variety of engaging questions, both of yourself and about the world around you. I want to help you explore these deep questions so you can find answers that will ultimately help you survive the intense upheavals of today.

About the Author
Ever since Jeremy Boggess was a small child, he has felt that there would be a chain of events set in motion and that his task would be to help us all through those changes.
He was born in 1971 in the United States of America, and in 2016 moved to Europe. In the 2000’s he ran for the Idaho Senate several times as an independent with a desire to make a positive contribution to the lives of people. In 2008, while running for office, he self-published his first book of philosophical observations, Thoughts & Responsibilities. He graduated from Boise State University and Lewis-Clark State College with business degrees. Additionally, since childhood, he has studied philosophy and sociology because of his concern for the future of humankind.

Wake up to a world of moral excellence, mental magnificence and physical perfection. But everything has a price of some type. A well-trained society is not necessarily a free one.

Immersed far and deep within the darkness of the night sky, existed a society which descended from the simplest form of matter, and evolved into an apex species of intelligent, peaceful beings. They developed into a spectacular species of people whose fascinating physical paled in comparison to the evolution of their mental. They achieved this status of excellence through generations of positive progress, as well as the emergence of the One World government.

The One World government systematically used perfected technology on chosen citizens in order to strengthen and eliminate evil from the brain by building empathy and character through vivid dream-lives. Sequentially, society as a whole was mentally on the same wavelength, ushering in generations of harmony and happiness. But like a good dream, utopias only last for so long.

About the Author
I like writing just as much, if not more than reading. Fiction writers are the foundation of great movies, great songs, & many other things creative, & we provide mental vacations for ourselves and other interested minds. I have been writing for over a decade and I feel I have perfected my craft. My main goal as a writer is to provide quality & intriguing fiction to readers of all sorts.

This book is bargain priced from 04/24/2015 until 04/30/2015 Check book price before you buy, as prices can change due to expiration of the sale or other technical issues.

This is the story of one man’s struggle to accept the past and move on before it destroys everything he is and could ever hope to be. In desperation Gerry flees society to save his sanity and ends up in the remote villages of East Africa. Midst the poverty, he encounters hope and more love than he could imagine. Will it be enough to save him? Can he repair the damage done to him in his childhood or will his abusers win in the end?

This book is bargain priced from 03/27/2015 until 03/31/2015 Check book price before you buy, as prices can change due to expiration of the sale or other technical issues.

After discovering the lost wedding ring of his late wife, Alex can’t handle being around Elsie anymore. He needs to find a way to open up to her again, but he will need time.

Elsie wants to be able to wait for him, but she can’t know for sure if Alex will ever come back to her. She wants him to be happy, but can’t let go yet.

Elsie is the first person who Alex has let in since the death of his late wife. Finally, he’s able to move forward in life instead of backward.
But when Elsie makes a date suggestion, everything comes back to him. He can’t handle the fact that being around Elsie is making him forget his past.
Will his demons ruin everything the two of them have built together, or will Elsie be able to show Alex that it’s time to move on?

Have you always dreamed of being a pilot or living on a beach? This book will show you how to turn your dreams into your reality!

This book reveals the power we have within us to go after the visions in our minds and become a master of ourselves. Setting a standard for how we should attack every dreams and passion with hard work and determination. There will come a time in our lives were we have to make bold decisions on which directions we need to go, the time is now to gain control of your thoughts, actions and dreams.

The purpose of the book is to change and uplift the lives of others. Too often we allow our dreams to fade away and dwell in the nightmare of doubt and regret wishing we could go back in time and do things differently. The day has come where we need to grab the bull by the horn and have faith in following our dreams. Specifically written to encourage and motivate the inner passionpreneur within you! you to keep going, fight harder and fear nothing. The goal of this eBook is share the thoughts of a passionpreneur, which is a person that lives with a great deal of passion and purpose.
What’s inside this eBook?

Is there anyone you can think of who has made a difference in your life? Have you ever stopped to take the time to write a letter to those special people to tell them how much they mean to you? Why is it that we often wait until it’s too late and end up publishing those thoughts in a an obituary section of a local newspaper? “My Letters From the Heart” is a non-fiction memoir written in an honest, heart-warming, and emotional series of letters to friends, teachers, coaches, and family members. You will walk away a different person after having read these life-changing and inspirational letters. They are laced with humor and the realities of life. Perhaps you will start to think about leaving behind something of lasting significance like “the letters of your own life.”

One signature will ripple her reality. Suffering from night terrors, Jessica participates in an extraordinarily compensated clinical trial. Implanted deeply within her skull by the Ventriloquist Dream Institute is an experimental dream chip.

After its first use, waking up she never recollected in no way imagined such lucidly was possible. A reoccurring dream, with a woman living in a box shaped room, colorless walls, ceiling, and base, illuminating them, painting a world that comes to life on a canvas from her painting, it seemed even more detailed and real. Not to come without a price though—involuntarily side effects from the dream chip were about to bleed over into her waking self.

Meanwhile Brad released from prison is taken to a shack to be prepped for surgery. A mysterious women introduced to him as Luna, frees him from his unasked for tampering. Sneaking away from his newly met rescuer, he meets Jessica in her back yard. Quickly forming a trust for each other, he convinces her to free herself from the dream chip she is suffering horrifying side effects from its attachment to her brain.

However, soon to be discovered she finds out that there is no cancellation policy for her clinical trial. As her dream world continues mixing into her, awaken self, exhausted with hallucinations, she searches for a way out.