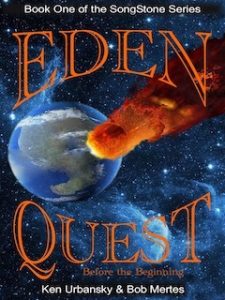 Lucifer’s rebellion has cast the universe into chaos, subjecting millions of innocent lives to futility, corruption, and slavery. But despite the darkness, there will always be those whose light cannot be dimmed. In EDEN QUEST, Before the Beginning, they come from the past, present, and future and are linked together in an unlikely alliance, each with their part to play in restoring peace to the universe.

About the Author
Ken Urbansky:  After receiving the highest grade in his eighth-grade creative writing class, Ken set aside writing for nearly fifty years to pursue other interests. His saxophone and involvement in the high school marching band were traded in a few years later for an electric guitar and rock and roll. The guitar surrendered to an M-16 when he enlisted in the US Army in 1968, and the M-16 gave way to the Bible when he and his wife Randi committed themselves to Jesus Christ while Ken served as a Military Policeman in Berchtesgaden Germany. After they returned home in 1971, they found the traditional protestant churches unwelcoming to two converted hippies who believed “1st century Christianity could be restored in the present time.” Undeterred, they planted their first church in 1972 in Avon Lake, Ohio, and spent the next forty years in Christian ministry. Ken served as pastor and worship leader in the churches they planted as well as the Assemblies of God, Methodist, and several independent denominations.
One couple that was a part of that first church plant in Avon Lake was Bob and Ann Mertes. Bob and Ann’s spiritual journey soon separated them from Ken and Randi as they pursued God’s plan for their lives on the west coast and Florida. Thirty years later, they were reunited and discovered that their love for one another remained as strong as ever. Visiting often with Bob and Ann at their home in North Carolina, Ken and Bob frequently spoke of the radical journey that God had taken them on.
“There’s a book in there somewhere.” Ken said, one day after a fascinating conversation about the “whole creation waiting for the revealing of the sons of God.” (Rom 8: 18-24)
“Well, then let’s write it!” Bob said.
That was eight years ago and the beginning of EDEN QUEST, Before the Beginning, Book one in the Songstone Series. After retiring in 2018, Ken and Randi moved to North Carolina, where he and Bob are devoting ourselves to the series. Book two is now finished, and book three is underway.

Amendment: It is with the most profound sorrow that I announce that Bob Mertes, co-author of the Songstone Series, died on November 20th, 2020, after battling the Covid 19 virus for over a month. He will be deeply missed by his wife, Ann, his four children, his grandchildren, Randi and myself, and so many more family and friends who loved him. Books one and two of the series are finished and available on Amazon. After a time away, I will complete the trilogy . Bob and I were planning on having it ready by the fall of 2021. While that no longer seems like a reasonable date, I will do my best to finish it as soon as possible.
Ken Urbansky