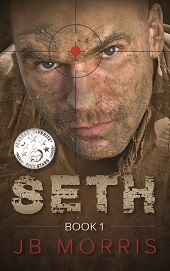 SETH is an international bestseller for readers who love crime thriller novels.

The Mexican Los Guerreros and Halcon Cartels declared war against each other for control of the drug trade. Hillsdale, Ohio, was ground zero. The drug cartel made a serious mistake when they took on former Marine Seth Collins, now a police officer in Hillsdale.
They threatened his father living in a nursing home before ambushing his best friend. Seth loaded up with firepower and declared war on the cartel assassins and dirty cops selling drugs. Once a member of the elite Marine Corps Force Recon, Seth received a Navy Cross during his six combat deployments. Hunting the Taliban in Afghanistan gave him the experience to hunt drug dealers.
The cartel sent their best assassin Angel to kill him. A feared assassin across the world, no one had escaped from her.
No one.
Don’t miss SETH If you love reading crime thrillers.