Rudely yanked from cryo-sleep, Daisy woke to find herself on a burning ship in deep space, and among a crew of modded humans, no less. Her life had just become a whole lot more complicated. And it was only going to get worse.

As if the creepy cyborg and the mechanically-enhanced human crew weren’t bad enough, what was supposed to be a simple flight home to Earth was going horribly wrong. A deadly plot was unfolding. One that could jeopardize the entire human race. And Daisy found herself stuck in the middle

It wasn’t her job, saving the world, and she sure as hell didn’t want it. But the snarky young woman didn’t have a choice. But with Daisy reluctantly coming to the rescue, did humanity even stand a chance?

END_OF_DOCUMENT_TOKEN_TO_BE_REPLACED 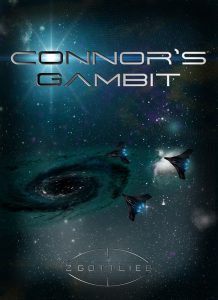 Brad Johnson, a lone witness to a UFO sighting becomes an alien target and quickly finds himself on an off world adventure, relying on his skills to survive an intergalactic war. As Brad struggles to understand the conflict between the aliens, as well as his place in the universe, he learns one group threatens Earth’s security and the other wants something entirely different. All Brad wants is to return home to his family, but not until he embarks on the greatest adventure of his life.

Human civilization has fled to the stars, abandoning a poisoned and deserted planet Earth. Now, hundreds of years later, there is an accidental and shocking discovery: not only has Earth’s environment been completely restored, but someone (or something) has taken up residence on humanity’s ancient homeworld. At the same time, unidentified warships begin attacking human outposts. Are these events connected?

To meet the threat, the Sarissan Union dispatches agents Frank Carr and Etta Sanchez to discover the identity of Earth’s new residents. The pair have to work fast however, because following close behind them is a Sarissan war fleet, whose actions will depend on what Carr and Sanchez uncover. Will First Contact be followed by peace or war? Meanwhile, political intrigue in the Sarissan capital threatens to rip the Union apart before Carr and Sanchez even complete their mission. The future of not only Sarissa and Earth, but of all humanity hangs in the balance.

This novel can be enjoyed as a stand-alone story, but is also the first book in the Starhold space-opera series. Space battles, spies, political intrigue, and surprises abound in Starhold.

Link To Buy Starhold on Amazon

Bob Astor is a Quality Assurance agent working at Vartan Inc. Lately his days have been stressful, to say the least. Butting heads with upper management has put his career on life support. A surprising change in circumstance has Bob going on a business trip to the moon city, Langrenus. On the way, he meets one of the delegates on board the Starbird, a desperate man with a dark past and a very dangerous secret. Through a mysterious series of events Bob finds himself in the middle of an interplanetary crises that no one knows about. These secrets could change – or destroy – all human life on Earth. The key to the answer of the crises is on the Red Planet, Mars. It’s up to Bob, the burnt-out Q. A. agent to rise to the occasion and stem the dangerous tide coming from beyond the solar system.

About the Author
Victoria A. Jeffrey grew up in Portland, Oregon, attended Portland Community College and studied graphic design. She is an author and an avid reader of science fiction, fantasy. She also enjoys reading historical fiction and non-fiction. She has written four collections of poetry and some short stories. She is a content developer for the Middle-Earth Network, the author of the Red World myth-fantasy trilogy. She has two upcoming series for this year, the Mission space opera series and a steampunk science fiction series.

Caitlin Diggs will have more to worry about than her on again and off again romance with her FBI superior when the goddess Isis appears in her mind. Is this a trick, or perhaps an evil entity linked to her psychic gift offered by the crystal? The crystal has offered Caitlin psychic gifts but also a strange connection to the Star of the Sea, or Isis. Even her cat Bastet seems to share in this linkage.
To make matters more complex, Diggs finds the Ennead has returned to Earth as promised. But are they here to share secrets of the pyramids or to take over? Murders and a mass demon disappearance coincide with their arrival to invite not only high strangeness but high suspicion.
Now Diggs must question if she is under the influence of gods, aliens, or a criminal concoction of both.
Because she can’t fingerprint the ‘gods’, Diggs’ search for the truth will take her to an unparalleled journey she could never imagine. Time traveling to ancient Egypt may very well reveal the truth of our origins and Caitlin’s true destiny with the crystal entity. But at what ultimate price?