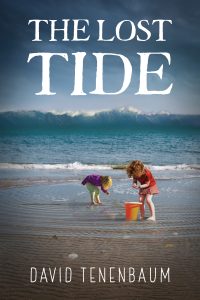 Oceanographers have predicted that global warming has increased the chances of the reoccurrence of a phenomenon that took place 50,000 years ago in which a mega-tsunami wiped out nearly all plant and animal life in what is now the Eastern United States. A modern-day collapse of volcanos in the Canary Islands as well as off the coast of the Northwestern United States could release waves that would begin at the height of nearly a full kilometer and travel towards cities in their path at the speed of a jet airplane.
Amy Woodson is a scientist who devoted her life to the study of oceanography after her sister was killed in a tidal wave. Her marriage to one of her colleagues, George Campbell, dissolved after Amy and George were forced to work on opposite sides of the Atlantic. Amy learns of the threat of a tidal wave when modest tsunamis hit the coast of both the United States and Europe following the release of a small piece of volcanic matter in the Canary Islands. When scientists investigate the incident and recognize that the collapse of the entire volcano is imminent, they realize that they must design a strategy to prevent the inevitable consequences of this event before the United States and England are washed away.

About the Author
David Tenenbaum is a novelist/screenwriter from Richmond, VA. He’s written four books and ten scripts including three film projects that have reached the finals of screenwriting competitions and a novel that have recently been shortlisted or awarded honorable mention awards in international book competitions. His latest movie, After School, a cautionary coming-of-age thriller, is currently in development with director Jeff Bassetti, and his satirical political podcast M.A.D. (Mutually Assured Destruction), is being released by BDP Entertainment in late November.

Water’s Edge Book One, Troubled Times Series
THE CLIMATE IS CHANGING. Thousands are fleeing the chaos and social unrest.
With their own water and power supplies, fourteen year old Nairne, her brother Zane and father Daniel are well prepared to cope with the effects of climate change, but most people are less fortunate. Thousands are fleeing the chaos and social unrest brought about by severe floods, heat waves and droughts which are sweeping across the UK.
When Nairne persuades her father to house some of the evacuees on their small holding in the south of Scotland she plunges the family into a world of violence, deception and murder.
Nairne soon discovers the truth. With society at breaking point, she has to grow up quickly as she alone can take revenge on those responsible. She discovers that the fortress Daniel built to give his children a chance has become the prize in a struggle where winning can mean the difference between life and death.