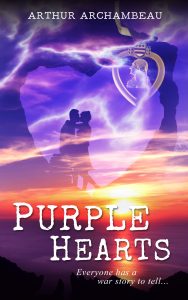 Everyone has a war story to tell

A jaded cop struggling to come to terms with her past falls for an idealistic former Marine-turned-cat rescuer on the crime-infested streets of West Baltimore.

Hope Kennedy is a cynical Baltimore cop. Her beat is the Mondawmin area of West Baltimore—the most dangerous neighborhood in America’s most dangerous city. And she’s struggling—unsuccessfully—to overcome a terrible event that has come to shape her life. Hope’s become angry and bitter. She’s spiraling out of control. Hope has lost hope.

Luke Matthews is a decorated Marine Corps combat veteran. He received the Purple Heart for a wound inflicted in Afghanistan. Now, he works as a carpenter for a nonprofit that builds homes for disabled vets. In his spare time, he volunteers with a local cat rescue. But Luke’s battling his own demons. He’s haunted by the war. Specifically, by a fog of war experience—a tragic accident—that has left him racked with guilt.

When Hope and Luke meet in a dingy alley, it’s anything but love at first sight. But a near-fatal accident a week later forges a bond. Eventually, in the middle of a cold Baltimore winter, a romance heats up. Little-by-little, Hope and Luke help one another feel alive again.

But Hope doesn’t know how to process her past, a past that is now jeopardizing her future. And as she and Luke get closer, she questions whether she’s worthy of his love.

Can two wounded, badly bruised, purple hearts come together and help one another heal?

Purple Hearts is not for the faint of heart. It’s as tough and gritty as the city it’s set in. It’s a slow burn, blue-collar romance about going the distance. And finding unconditional love at the end of the journey.

And along this journey, Hope and Luke meet a memorable cast of supporting characters—a no-nonsense police sergeant who practices tough love. A colorful late-night radio DJ. A homeless Vietnam veteran. A repentant mobster. A precocious young boy who seems to be in the know. A mysterious emergency room physician. A street cat looking for his forever home. And a little girl fighting cancer.

Purple Hearts is a story about life and death, joy and sorrow, laughter and tears—and ultimately, hope. All wrapped in the love of two perfectly imperfect human beings.

Cat Born to the Purple, 4th volume in the Yeshua’s Cats’ series, picks up the story from Yeshua’s Cat of a young woman who had been stoned. Yeshua healed her after sensing her, battered and barely alive, in the burning hills near Sepphoris, and renamed her Eliana, “God has answered my prayer.” He settled her in Cana with his friend Eli to keep her safe from her husband and mother-in-law, who had accused her falsely and incited a mob to stone her. Now she’s beginning to put her life back together—except for the memory of her stoning, which she has walled away in darkness. Eli’s wife Rachel encourages Eliana’s extraordinarily gifts for weaving and needlework, hoping Eliana can make a living with her skills. But a year after her healing, Eliana’s in-laws begin to suspect that she’s still alive, and Yeshua returns to help Eli find her a new place of safety.

Eliana accompanies Yeshua and his cat Mari to the Phoenician coastal city of Acco. There her handwork impresses a prominent merchant of the royal purple murex dye. He offers her an apprenticeship in his workshop under the wing of a Jewish widow, sold into slavery after the rebellions at Sepphoris, but now a freedwoman living as an adopted member of the merchant’s family. While in Acco, Yeshua discovers that the merchant’s peculiar devotion to the goddess Bast has twisted the hearts of the many cats living in his house—feral cats descended from the sacred cats of the once great temple of Bast in Acco—convincing them that they are godlings in their own right. For the first time in his ministry, Yeshua reaches out to deliver non-human creatures ensnared by human wrong.

Eliana, now widowed and her name altered to the Greek “Aeliana,” prospers in her new home, learning how to harvest and brew the priceless purple dye. A clever speaking kitten with a fascination for looms and a gift for dreaming becomes her constant companion. After meeting a young Anatolian merchant, Aeliana finally begins to believe in the possibility of love, in spite of the constant threat of a co-worker’s violence. Still, although she follows the One’s light as best she can, she is shattered again by the terrifying evil loosed on the world at Yeshua’s death. But together with all creation, Aeliana’s life is made whole at last in the miracle of the Resurrection.

Targeted Age Group: All ages from teen through adult

Link To Buy Cat Born to the Purple: A Sequel to Yeshua’s Cat on Amazon

Years and distance kept the memories at bay. But back at home, the past is ready and waiting to haunt her…

Eighteen years have passed since Joy’s childhood best friend, Jenny, met her death in a tragic car accident just a few days after their senior prom. A broken Joy left their small Kentucky hometown shortly after — determined never to come back. But when her father’s illness forces her to return, she realizes that neither time nor distance have truly healed her troubled soul.

Plagued with nightmares of the accident and crippled by a vague fear whose source she can’t identify, housecall veterinarian Joy realizes that in order to move on she must face the truth behind several disturbing gaps in her memory of that fateful spring. But the only person who can help her is a man she despises: Jenny’s erstwhile boyfriend Jeff, now a respected doctor, whose carelessness as a teenager was the cause of Jenny’s horrendous death — and Joy’s own emotional destruction. Can she ever forgive? She may have no choice but to try. Because both the danger she sensed — and the childhood friendship she treasured — now suddenly seem very much alive…

About the Author
No matter the genre, USA Today bestselling novelist and playwright Edie Claire strives to infuse all her writing with both warmth and humor. Her family-friendly Leigh Koslow cozy mystery series, a favorite of animal lovers that was originally published in 1999, was reborn in 2012 to become a Kindle Top-10 bestseller. Her romantic novels range from women’s fiction with romantic elements to a blend of romance and mystery, beginning with her traditionally published contemporaries, the award-winning Long Time Coming and Meant To Be (now a Kindle Top-25 bestseller), and continuing with her exciting new series of interconnected romantic novels, Pacific Horizons, whose characters follow the migration of the humpback whales to some of the most gorgeous locations on earth. In any Edie Claire work, the reader may be assured that intrigue will beckon and tensions will rise – but love will triumph and happy endings will abound!

The death of Alistair has brought a measure of peace and calm to those at P.A.W.S., but his silver charm remains in Miri’s possession and it seems to almost have a life of its own.

Nightmares and questions torment Miri until the charm mysteriously disappears and Jessamyn seeks help from Quentin, who claims to have repented his past association with Alistair. But can he be trusted?

And what of Jenna, a young girl once held captive by Alistair who carries a terrible secret—a secret that could determine the future of P.A.W.S.

Targeted Age Group: Age 12 and up