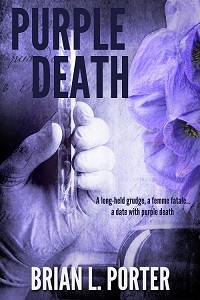 As the murders begin to multiply at an alarming rate, Connor finds clues hard to come by, and every lead takes him down yet another blind alley. The killer seems to be one step ahead of the police at every turn. Together, he and his assistant, Sergeant Lucy Clay, must piece together the shreds of evidence that will lead them to the mysterious Chocolate Woman and in turn to the brain behind the horrific murders that soon come to be known as “The Purple Death.” Purple Death is soon to appear as a motion picture produced by Thunderball Films LLC of Los Angeles.

Author’s excerpt from the novel

Arminder Patel signed on the dotted line and she took her leave of the doomed man with a cheery wave and a “Thank you so much, have a nice day Mr. Patel.”

Driving at a steady pace so as not to draw any undue attention to herself she stopped, only to follow her instructions and dispose of the one remaining chocolate. It was easy to melt the poisoned confection by simply opening the hood of the car and placing the chocolate on top of the hot engine block. A stroke of simple genius and the murder weapon was rendered instantly untraceable!