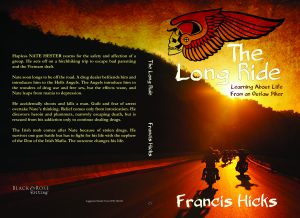 Nate, a naive, eighteen year old misfit, sets off on a hitchhiking trip to escape bad parenting and the Vietnam draft. He yearns for the acceptance and safety of a tribe and finds them both in Cleveland’s branch of the Hells Angels. But, they come at a price.
The Angels introduce him to the wonders of drug use and free sex. Nate instantly takes to speed and cocaine, which mask his fears and inhibitions. Ever craving acceptance, he jumps into ripping off drugs and confronts rival biker gangs. When he accidentally shoots and kills a drug dealer, Nate descends into a spiral of fear and paranoia so strong only heroin brings him relief. Spider, his Hells Angel mentor, rescues Nate from an overdose and helps him get clean, but the damage is done.
His lover shuts him out. The Angels run him off. Spider and Nate kidnap a man who had stolen some drugs from them. When they crush his knuckle with a pliers as retribution, gang war threatens to erupt and Nate is caught in the crossfire. Life as he knows it, is over.
The Long Ride: Learning About Life From An Outlaw Biker takes you on a thrilling ride of emotional and physical violence, love and hate, survival and the unbreakable bonds of friendship. In this gritty and sensual tale, Francis Hicks offers a hard look into the darker side of self-discovery.

About the Author
Francis Hicks grew up in a dubious neighborhood in Milwaukee where he played drums in a rock and roll band. He took up writing as a way to meet women and ended up writing a novel. Now living in San Antonio, TX, he has been a successful salesman, house flipper and occasional poet. His poetry and non-fiction have appeared in anthologies and literary magazines.

As enforcer of the Desert Rebels Cole’s job is to protect his MC. As a favor to a friend they take in a young woman who they think is trying to escape a crazy ex. But she’s lying. When the truth comes out, so does trouble to the club. Cole wants Raven, but will their explosive attraction to one another be enough to overcome the deception, and give them both a chance at happiness?