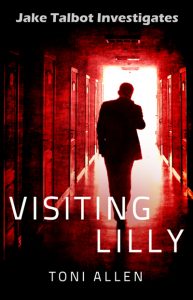 Why should a man at a Surrey police station go ballistic because someone tries to visit Lilly, his elderly grandmother?

Detective Inspector Jake Talbot is intrigued, and this little puzzle might serve to distract him from sorrows of a Christmas past. Soon he is entangled with Frankie, an odd young man who claims to have met Lilly in her youth. Talbot dismisses the notion of time travel, but then discovers the Ministry of Defence has been monitoring Frankie since his friend disappeared ten years previously. Forced to work with the MOD, Talbot unearths family secrets and betrayals. The families act ruthlessly to prevent him from discovering the facts, colluding to ruin him.

If Frankie is innocent, Talbot won’t let him be victimised. An uneasy understanding grows between them as they follow the evidence, for only the truth will allow Frankie to visit Lilly.

What Inspired You to Write Your Book?
For a long time I’ve been interested in near-future technology and enjoy contemplating what might be invented next. A hundred years ago people would have laughed in your face if you’d told them that they could walk around with a telephone in their back pocket, yet it is with us right now. In fact, we have an entire computer in our pocket. Anything is possible and everything I write about in Visiting Lilly is plausible.

The idea came to me in a half-dream when I saw two men visit a beautiful woman who lived in a different time. Only one man returned, and it made me ask the question, “How did they get there? And where’s the other guy?” Did they travel in time, or did something else happen? What near-future technology was used?

I quickly realised that Frankie, who had visited the woman, could not tell his own story, so I created Detective Inspector Jake Talbot to investigate the mystery. With the introduction of Talbot it made it possible to explore how society reacts to a young man wanting to visit a much older woman, and whether society as a whole can accept someone who presents challenging behaviour.

How Did You Come up With Your Characters?
Frankie Hayward appeared to me in the blink of an eye, fully created. It was as if I already knew him. He’s twenty seven and a mathematical genius, yet socially awkward due to being somewhere on the autistic/Asperger’s spectrum.

When it became obvious that Frankie was not the right person to tell his own story I created Detective Inspector Jake Talbot. Frankie was too close to everything and I needed someone to help tease his character out for the reader. Developing Talbot as someone who was more than just a foil for Frankie took careful planning as he needed to be compassionate but also retain his tough shell.

Book Sample
Detective Inspector Jake Talbot couldn’t help but overhear the conversation erupting into warfare over at the front desk. He was snooping around, trying to find out who’d nicked his favourite mug, when a man burst in from the street demanding to know why a certain someone hadn’t been arrested. Apart from the raised voice there was one word that made Jake Talbot stop and listen. Pervert. Hmm, he was always interested in smut; he’d built his name and reputation on it. Perching on one of the desks, just out of view, he tried to piece the fragments that he could hear into coherent sentences.
‘… the man wanted to visit my grandmother … nutter … perv …’
Now to Jake’s mind a nutter and a perv were two completely different animals, so which were they dealing with here? A perv was inclined to proceed towards sex or masturbation, while a nutter—well, that all depended on precisely how nuts they were. It was tempting to go and get involved, but the man sounded far too irate for reasonable conversation. Currently, Talbot couldn’t be doing with unreasonableness; his last interview, a final questioning of a suspect on the Lasseter case, had seen to that.
By the time the angry man agreed to go away, all of the circulation had been cut off down Talbot’s left leg, resulting in pins and needles when he peeled himself away from the table. Damn, at forty-three he was getting to that stupid age where you had to start looking after yourself a bit better. Swearing under his breath, he limped up to the desk sergeant.
‘What was all that about?’
‘The guy’s a nutcase, sir.’ The desk sergeant shook his head. ‘I don’t see his problem, I really don’t.’
‘And his problem is?’ Talbot peered over his shoulder, impatient to read his notes. ‘So why does a twenty-seven-year-old man wish to visit Mrs … what name is that?’
‘Charteris.’
‘I take it that is the Mr Peter Charteris we are talking of here?’
‘Dunno.’
Talbot picked up the notes and scanned them. ‘Peter Charteris isn’t even thirty, and already owns a golf course over at Woking, and a couple of posh hotels—and all his money can buy is a grotty room at Mellow Acres for his beloved grandmother to live out her final days. Tight git.’ Without asking, Talbot folded the notes into four and tucked the square of paper into his jacket pocket.
‘You taking that with you then? Sir?’ The desk sergeant held out a pen anticipating a signature.
‘Looks like it.’ Talbot smiled and patted his colleague’s shoulder, and went off to find the two officers who had questioned the suspect.
*****
They had conflicting opinions. PC Oliver described him as sullen, while the younger PC, Reynolds, described him as surly.
‘Unhelpful,’ Oliver said for the umpteenth time. ‘Didn’t even want to give us the time of day.’
‘He kept us outside, in the rain,’ Reynolds complained.
‘He’s not obliged to let you into his property.’ Talbot was irritated by Reynolds’s surly nature; yes, he was the surly one, hardly likely to inspire confidence even in the innocent. ‘But he did answer your questions,’ Talbot went on. ‘He did comply.’
‘His place stunk,’ Oliver threw in, as if that were sure to make the man guilty.
‘And the man himself? This Francis Hayward, was he clean and tidy? Dirty?’
‘Suppose so,’ Oliver said.
‘Was that “suppose so” relating to clean or dirty?’ Talbot leant against the table and, by changing his view, caught a glimpse of green china, and closed the case on who’d stolen his mug.
‘Clean, I guess.’
‘And you think he was obstructive?’
‘Well, let’s just say he wasn’t particularly co-operative.’ Oliver’s voice rose as he took a confrontational step forward, intent on driving his point home.
Talbot knew Oliver’s type, and didn’t much like it.
‘And this Peter Charteris, the complainant, did you speak with him?’
‘On the phone,’ Oliver said. ‘He was polite.’
‘Yes, but what was his grievance?’ Talbot picked up Oliver’s note book again and flicked through it. ‘Well, what was his problem?’
Reynolds sprang to Oliver’s defence. ‘Why would this Hayward guy want to go and perv on someone’s grandma?’ He grimaced, the idea repugnant.
‘If you had your way you’d have everyone under forty who volunteers to visit the sick or elderly locked up.’ Talbot jabbed his finger down hard onto Oliver’s note book. ‘Type it up, every word; I want it on my desk in thirty minutes.’