Review: Current cross border immigration issues feature prominently in this action novel. An intelligent police officer battles cross border drug Lords, while he and his fiancee prepare for their marriage. On the other hand, a junior Senator learns how tough the opposition can be, particularly if you happen to be on the wrong side of influential men.

The book presents some introspective views on the immigration argument, and the inclusion of the love story, is a deft stroke, that mellows the serious issues addressed in the story with entertaining side issues.

A definite read, not only for the action, but also for the views expressed through the different characters!

Review: I love genre stories that transcend their genre and present a deeper significance to the unfolding events and this is certainly one of those. The story covers not just some significant geographical ground (from Mexico to San Diego and Los Angelus to San Francisco, New Mexico and even cross country to Washington D.C.) but also political and philosophical. We get to see how laws enacted (or not enacted) in D.C. get to play out on the street and how they impact and in some cases impair the local law enforcement’s ability to deal with local crime. However, as this story so deftly shows, crime is not so local, after all, especially when they occur in high places like the U.S. Senate, which this author shows is undeniably plausible. I loved the character of Mike McBride, is there anything this guy cannot do? Although I wonder where he goes from here having been seriously promoted. At least, for his sake, I’m hoping it’s a promotion that he’s going to be happy with (although, knowing him, I seriously doubt it). What happens next, I wonder? 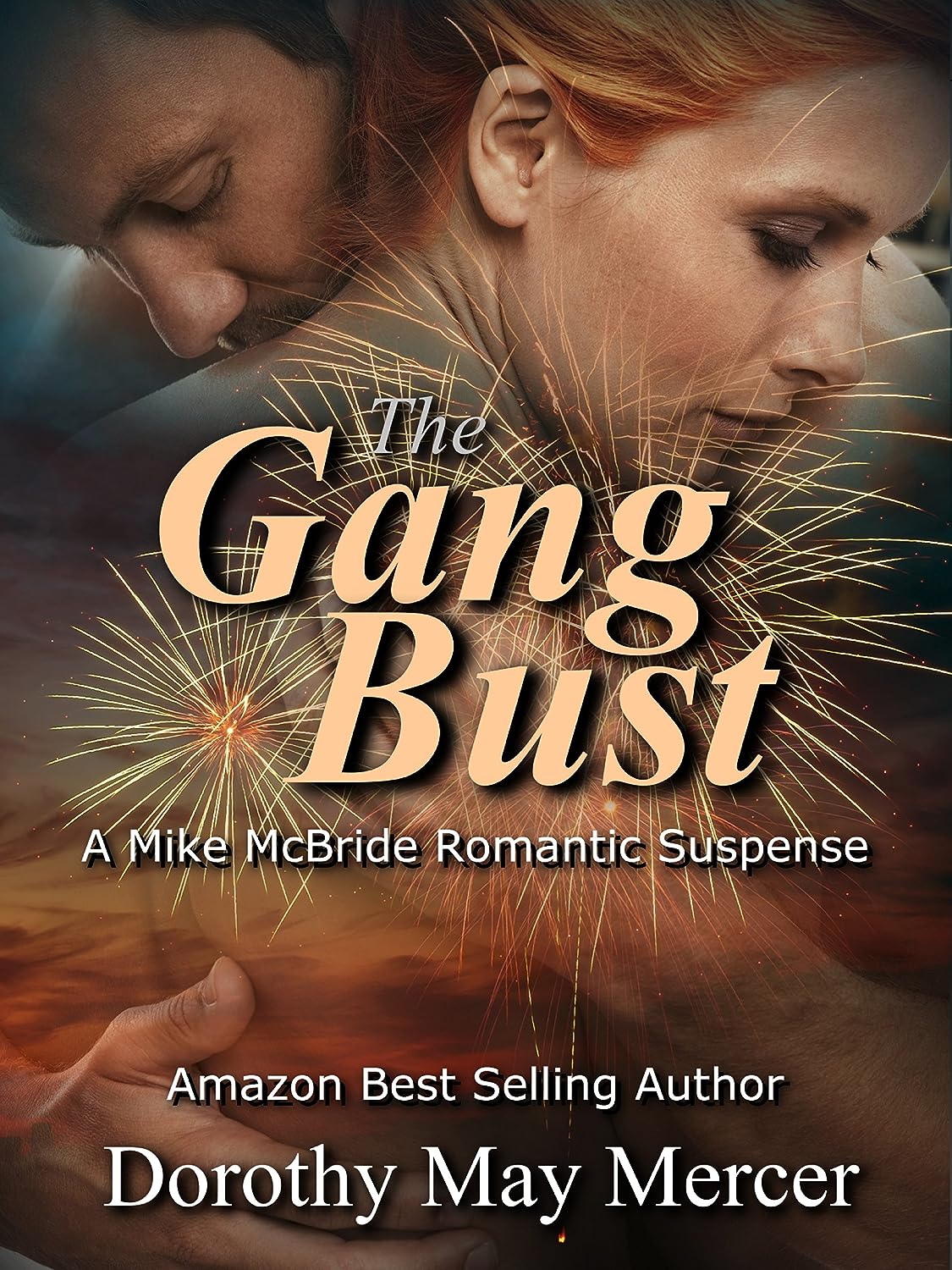 About the Author:
Best selling author Dorothy May Mercer lives in Michigan, U.S.A. with her husband. They commute between two lakefront homes. Her hobbies are writing, reading, playing the piano, helping others, traveling, skiing, boating, and golf.

In the Washington McBride Novels, each book stands alone as complete. The series takes off where The McBride Series stopped. In Book One, “the Fairfax Fix,” Mike McBride, now a crusading US Senator, deals with a local gang which preys on pretty high school girls, using them as prostitutes to finance their gang. The gang operation is inspired by an actual gang in Fairfax, VA whose members were arrested for pimping, etc.

Book Two, “the Arlington Alias,” opens in nearby Arlington, Va. Juliette McBride and Cynthia Patterson play a prominent role in rounding up a Human Trafficking Syndicate, operating in the metro area and around the world. Again, the story is inspired by actual arrests for human trafficking and offers links in the Bibliography for more information.

The final book of the trilogy “the Savage Surrogate,” is the ultimate in story-telling. If you cry at happy/sad movies, have your Kleenex ready. Lady Dog with Juliette and Mike McBride are involved in separate, seemingly unrelated crime-solving capers, which all come together in one grand finale. In this novel, the author cleverly weaves four threads in and out of danger and into a common joyous blanket. For you arm-chair detectives, clues are planted, right and left, so, set aside a weekend and be prepared for a fun ride and a surprise ending.

A surprise best-seller is the author’s illustrated true-life adventure, “Alaska and Back” with Dave and Dorothy. No Kleenex required. This is not a “Complete guide to Alaska,” rather it is an illustrated journal of an ordinary couple’s motor-home drive from Michigan to mainland Alaska, and back, including their adventures, misadventures and laughs. If you have ever wanted to ask, “Do you think we could drive to Alaska?” you will enjoy this book.

In line with her hobby of helping others, the author, with 16 books under her belt, has launched a series of 99 cent articles “How to for You” aimed at passing along some of her hard-earned advice for the growing ranks of Indie Authors. By the way, Dorothy has given away oceans of advice, but 99 cents is the cheapest price that Amazon allows. Note: these are articles, not books. Each one addresses a specific issue. As of now, the most popular is (surprise) “How to Write Paragraphs and Sentences.”

Her popular McBride series of five adventure fiction novels features cop hero Mike McBride in every book. In addition, each book is dedicated to a different branch of homeland security. Book One features the police, book two the Coast Guard, book three, the Border Patrol, book four the DEA and ATF, and book five, all Federal, State and Local law enforcement who work together to fight crime and corruption, and protect the homeland.

Dorothy is attempting to make the series suitable for all adults in that her heroes, as role models, do not cuss, have explicit sex, or shoot anyone except to save a life. Her villans do, however, so parental guidance is suggested for teens. In addition to fun, adventure, and vile villans, the plots include romance, relationships and family situations. For the sentimentally inclined, each novel contains a unique and different wedding.

An overall theme of the series is the war on illegal and harmful drugs. Through the use of exciting stories, Dorothy is attempting to educate people on the dangers of using such drugs.
An accompanying theme is to acquaint readers with the host of problems attending the porous border between the US and Mexico, resulting in the importation of illegal immigrants, drugs, cartel violence and kidnapped women, as well as the deportation of jobs, arms and ammunition.

Hero of the series, Det. Lt. Mike McBride, his pals and his dog confront all of this in exciting adventure-stories; in the end wiping out cartel bosses, gangs and smuggling rings, dealing with drug addiction, and solving the immigration problems in exciting and surprising ways. Don’t miss the great ending.

The first book of a new Washington McBride novels, located in and around Washington D.C. features Mike McBride in the new role of crusading senator. This series will continue to deal with contemporary USA problems of crime and corruption, but will not necessarily censor the sex scenes for tender young eyes and ears, nor will it go out of it’s way to add them. Let’s just say, this series is for adults and whatever happens, happens. In this first book, Mike confronts a suburban prostitution ring run by a gang. The book deals honestly with this subject.

The second book in the Washington McBride Series, The Arlington Alias, is for the ladies. Why? While Mike McBride is still there, helping out, the book features his bride, Juliette and his secretary/bodyguard, Cynthia Patterson, as protagonists. Juliette must adopt an alias to write a series of explosive articles about a local crime syndicate. She sticks her reporter’s nose into the wrong places and soon gets into a peck of trouble.

Dorothy has a life-long habit of helping and teaching. So many authors have asked her for help, she has launched a series of “How To” articles for burgeoning authors, priced as cheaply as possible, on Amazon.

Her travelogue, “Alaska and Back”, With Dave and Dorothy, recounts their exciting and sometimes hilarious trip to Alaska in their motor-home.

The final McBride Washington Series novel, “the Savage Surrogate,” is being edited and will be out in time for your Holiday shopping, 2013

For the past three years, Dorothy has taken part in NaNoWriMo’s November novel writing race in which author’s attempt to write fifty thousand words in one month. It is the equivalent of running a marathon, for athletes. Dorothy has succeeded, you know, and has the T-shirts and published novels to prove it.

In 2013, Dorothy went one step further and accepted the July challenge at Camp NaNoWriMo, once again completing a full-length, fifty thousand plus word novel in one month. Great fun for all, even those who do not make it to the finish line. During the course of these events, Dorothy has met wonderful companion authors from all over the world, with whom she exchanges free editing, advice, help and encouragement.