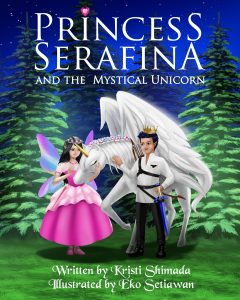 A story about a winged unicorn and her journey to find love, acceptance, and friendship.

About the Author
Kristi Shimada is a children's book author, visionary artist, registered hypnotherapist, and dream worker. She has also written Mariko and the Magic Mirror, The Enchanted Starflower, and The Samurai's Gift.

‘Tales of the Horns’ is set in a world where the legends, myths, heroes and gods of our past are still very much alive. For now at least. As Ragnarök looms, they wait out the end of their days in pockets of reality parallel to our own. Sides are being drawn as many contemplate a rebellion against the oppressive new gods who rule the heavens. Who will fight for Life and who will fight for Death?

Enter Mary Horn. A girl stolen from home to toil beneath the streets in an evil wizard’s shop. Corrupted by strange and foul magic, Mary must win her freedom before she herself is turned into a monster and uncover her true destiny before the end of the world.

About the Author
Hi.
I'm a new author trying to break into the scene. I have loved fantasy since an early age in all of its facets. My love of adventure and magic soon led to an interest in mythology and folklore. 'Tales of the Horns' is a marriage of all the above, culminating in a world that is dangerous, intriguing and real. I hope you enjoy the first book and look forward to where the story may end.
R.

This book is bargain priced from 06/07/2015 until 06/11/2015 Check book price before you buy, as prices can change due to expiration of the sale or other technical issues.

Áine lives in the light, but she is haunted by darkness, and when her fey powers blaze out of control, she escapes into the Shadowlands. But she cannot outrun her past. Fire fey and a rising darkness threaten the light, burning a path across the veil. Her fiery dreams come to life, and with the help of Hennessy, an uninhibited Irish girl, Áine dives into the flames to discover who she truly is. Her mother burned to keep her secret safe, and now Áine wields the deadly Eta. She must learn to fight in the shadows — or die in the flames. This is not a fairy tale.

(Novella)
Caderyn is on a mission. To design a fairy tale garden for a little girl and put her company, Secret Gardens on the map! She does not have time for romance, and she does not believe in fairy tales.
But, fate has a mind of its own…
An ancient race is in need of a savior, and it has chosen Caderyn. In the blink of an eye, she is thrown into the world of the Fae. It is a race against time to save the Fae King, and release him from five hundred years of imprisonment. Beautiful dreams turn to nightmares, as she becomes hunted by the Shadows who enslaved the King.
An evil alliance are determined to destroy the Fae, and enslave humanity. The destiny of all is in the hands of a woman who has to let go of reality and trust in her heart.
Caderyn learns that fairy tales do come true, just not always the way you expect.

Not-quite-sixteen year old Lizbet Moore expects a boring last month of summer vacation — and she gets what she’s expecting until a fifteen hundred year old Fae named Eamon shows up in her backyard disguised as a down-on-his-luck garden gnome. When Eamon slips an ancient amulet around her neck, the memories of Lizbet’s many past lives, including her first life as Morgan Le Fae, come slamming back to her to change her summer plans in a way she could never have expected.

Forced to go on the run when murderous monks show up at the back door, Lizbet hops a plane to Scotland accompanied by Eamon, the whispering voices of her past lives, and geekily cute James, the college boy from next door. Not only does she have to dodge the monks, but she’s racing against time and greedy land developers to prevent the entire race of the Fae from being destroyed.

The only thing Lizbet knows for sure is that if she fails and can’t produce a few live fairies at the end of her journey, she is going to be grounded for life…and probably for her next life, too.

About the Author
Jill Nojack is a writer, musician and artist. She has rarely managed to make a living from the pursuit of her creative endeavors. Instead, she’s a corporate drone who stays up late to indulge her passion for writing Urban Fantasy, making music, and drawing/painting.

Ms. Nojack has cred. Way back in the long ago, she romped through a degree in English. She followed it up with a Master’s degree in Sociology. During her time at University she served on the staff of the school’s literary magazine. She eventually stepped in to the editor’s role.

Shortly after graduation, she published several short works (stories and poetry) in small press. Like most young people who hope to pursue the creative life after college, she quickly realized you can’t feed your family in copies or with pennies from the coffee shop “tip the musician” jar. Having achieved financial stability, and no longer having a family to feed, Jill is free to return to her love of writing as the focus of her leisure time.

When she isn’t exploring her creative side, Jill enjoys laughing too loud and long in public and talking about herself in third person. She resides in the great American Midwest with a long-suffering cat.

Friendship, the most pure feeling…especially when it comes from the cutest creature…Elisa is about to find out that fairies not only exist but they can also make miracles!!!