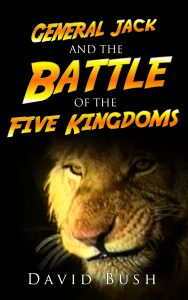 The times were hopelessly dark.
In a green land before time, all animals of the world laboured under the repressive rule of King Roar the lion and the fierce Felines.
Miaow, the timid and inconsequential chief of the cats befriends a fourteen-year-old mysterious explorer, Jack. These two unlikely heroes engage in the impossible struggle for liberty of the repressed animals and self-determination. The conflict reaches its apogee with an epic but disastrous battle.
Although the two protagonists were aware that their survival was at stake, little did they know that their enduring friendship would radically alter the destiny of the animal world forever. This book should appeal to fans of “The Hobbit”and “The Chronicles of Narnia”.

About the Author
David Bush is a practicing haematologist. He has authored many scientific papers in international journals and he is a regular contributor to an influential political blog. He counts any type of DIY job among his many hobbies. Above all, he cherishes the time he spends with his two great nephews Jack and Luke.
This is the second book of the Jack trilogy in which his nephew becomes a protagonist in the plot. Winner of the Literary Titan Book Award and Indie Book we Love Award.

This book is bargain priced from 03/08/2015 until 03/30/2015 Check book price before you buy, as prices can change due to expiration of the sale or other technical issues.

Haven, the once-shining city, is slowly and painfully losing the only source of light left in the world: a tree which has perpetually burned for hundreds of years. As Haven grows darker with each fallen branch of the tree, many turn to hopelessness and fear, and some to the mysterious power of the unlight that lurks in the shadows. Only a brave few will set upon a quest to seek out a new light and fulfill the ancient prophecy before the ravenous darkness consumes what is left of the dying kingdom of Haven.

When the great burning tree of Haven begins to die, leaving the otherwise unlit world of Aiénor in a state of ever-growing darkness, a young man sets upon a quest to discover a new source of light before the unknown evils lurking in the shadows unleash their fury upon the unsuspecting world.

Fear strikes the citizens of Haven at the diminishing of their holy tree, and they determine that the only way to fend off the impending dark is to set about making their own light. There are plenty of trees in the forests of Aiénor to burn. But what happens when the timber has been consumed and the great tree has failed?

Could it be that one will emerge who will uncover the prophecies of old and seek the promised light?

I scarcely can recount to you the sheer dread I experienced at the moment of my birth. It was an instant of pure pain, surmounted only by the shock and horror at the sight of my hideous body.

You say it is unusual to remember so vividly the event of one’s birth? It astounds me that anyone could forget such excruciating trauma. What did it feel like? Like being struck by lightning, only the pain was a thousand times more agonizing. My nerves were zapped into cognizance by innumerable volts of electrical current—enough to return animation to that which had formerly been lifeless.

My mind burst into being in an explosion of raw circuitry. My limbs flailed in all directions. After the distress of electrification subsided, the incisive sting of my many flesh wounds overwhelmed me. Suture scars seared the perimeters of my wrists and of my groin, where parts had been attached that were inorganic to my form. The agony of mere existence saw me howling like a wounded animal, for at that early point in my being I possessed no capacity for speech.