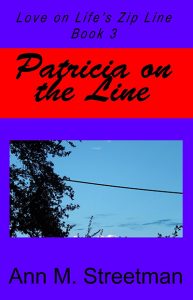 Patricia on the Line by Ann Streetman

This is Book 3 of Love on Life’s Zip Line. John just kept surprising Patricia. Remembering little things about her and about their life together. He was like the man she married so long ago, not the man she had spent so many years hating. Could she take a chance on him again?

How Did You Come up With Your Characters?
To be honest, John Donaldson is my favorite character of the series Love on Life's Zip Line. It is his wisdom gained through mistakes and perseverance that inspired me to write the series and all the other characters in it. Many novels later, John Donaldson is still a special character to me and one I believe is worth sharing.