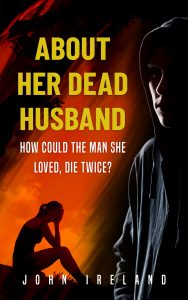 How could the man she loved, die twice?

Now he has turned up dead, again.

Jean is desperate to prove two things…that she’s not the killer, and that her marriage wasn’t a lie.

She’s hired a young private investigator. But Eddie Fate is making every PIs worst mistake, falling in love with his client.

As more bodies pile up, the darker and more dangerous the truth becomes.
An undelivered letter, and a lover from her past could hold the answers to her questions…or lead to her own murder.

A hot, sexy, romantic thriller…About Her Dead Husband.
From the exciting new writer of “Two Timing,” “The Sentimental Killer,” and
“Murder at the Magic Hour.”

About the Author
John Ireland was born into a garden of fantasies…the motion picture business. His father was an academy award nominated actor. His mother was a more private artist. Along the way, Ireland fell in love with words. He has written and produced movies for television, documentaries, and stage plays. His play "Johnny Morran" became a movie that he also directed. When Ireland turned to writing literary fiction, he found his muses in the crime movies of his childhood…with an added splash of French and Italian films from the sixties and seventies. Caught in conflicts of conscience, lost in the purple haze and red mist of sex and violence, often his characters aren't sure they're still alive until they run out of skin, and the ocean and sky are the blues.
Ireland describes himself as "Never an expert, always a student…interested in sports cars, firearms, 35mm photography, fine art (prefer the moderns), cooking, wristwatches, psychology, my own health, politics, the alto saxophone…whatever else in life that I trip over."
Ireland's new series of books, The Los Angeles Stories, is an anthology of eight human comedies and dramas, they are all rooted in the City of Angels. The time is the present. The characters are passengers heading to uncertain futures. The only technology that is important is the human heart.