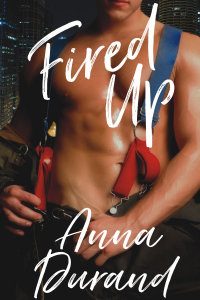 Fired Up by Anna Durand

He sets women ablaze, but the only one he needs may be fireproof.

Firefighter Adam Caras has seduced more women than he’d ever admit to, earning the nickname the Arsonist, thanks to his explosive sensuality. Unfortunately, he realized he’s in love with his best friend Mel five minutes after she hooked up with her sleazebag ex. For two years, he’s kept his true feelings a secret. His libido, on the other hand…not so easy to rein in. Now that she’s free, he has a plan of his own. He’ll win her heart the only way he knows how–in bed–by employing every weapon in his lady-killer arsenal.

As best friends become lovers, they must risk everything for a chance at happiness. If they can overcome their past mistakes before it tears them apart…

What Inspired You to Write Your Book?
In 2015, I wrote a short story called Tempted by a Kiss, about a firefighter and his lifelong best friend. This friends-to-lovers story became a favorite among my fans, but everybody wanted more of Adam and Mel. I did too! They're at the top of my list of favorite couples from my books. Almost as soon as the short story was published, I began writing the novel version to expand on the original story and make it something really special. And really hot!

How Did You Come up With Your Characters?
I wrote the short story the book is based on for an anthology submission call, but the anthology got cancelled. The call had been for hot romances set in an underground club, so that's why I came up with Dance Ardor. The club has almost become a character, appearing in three of my novels including Fired Up as well as the Hot Scots series. I love the firefighter trope, and the friends to lovers trope, so I decided Adam needed to be a super-sexy firefighter with spunky best friend. Mel needed to be a strong, independent, and successful woman who could hold her own with a macho guy — so I gave her a very successful web design business she built from the ground up.

Book Sample
His hand on her hip glided down, cupping her ass. “I’m going to kiss you. Now. If you don’t want it, walk away.”

Moving his head, he forced her to tip her head back to see him as he ran his tongue across his front teeth, back and forth, back and forth, and for a heart-stopping second she wondered if he was imagining exploring her with that tongue.

She ought to leave. Part of her wanted to. But a far more powerful part craved his mouth like she’d never craved anything in her life. Since she must’ve already wrecked their friendship with her antics last night, what harm could it do to enjoy a taste? Screwy logic again and you know it.

To hell with logic. She could indulge in one kiss before she enacted her new life plan. They could still be friends afterward. One kiss, nothing more.

Adam brushed his lips across hers, the barest contact, but it robbed her of breath. Her eyes fluttered shut and her body came alive, every nerve excited, every hair taut. He traced the seam of her lips with his tongue, so delicately, and she couldn’t stop her lips from parting for him, pleading for him to take her mouth. And oh, she burned for him to do exactly that.

His tongue stole inside her mouth, stroking over hers, lingering with each silken caress, teasing her into responding. Still, he kept the pace languid, tormenting her with every lap, exploring her mouth as if he planned on spending days just kissing her. His hand massaged her ass, and as his fingers kneaded harder and faster, his tongue thrust hotter and stronger, propelling her need to dizzying heights.

She flattened her palms on his six-pack abs, dragging them down to the towel. Slipping her fingertips between the terrycloth and his skin, she tugged on the towel to urge him closer—or maybe to dislodge the towel. His tongue was driving her mad, driving out reason, until she had no clue what she was doing.