Broadcast Brothers: On The Radio by Steve and Paul Jenner

Like BritLit? Like the British sense of humor? Like a real, autobiographical story with added rock ‘n’ roll? Well, this is for you. On Amazon.co.uk this has at the time of writing 17 x 5 star reviews; now we’d like to get that on Amazon.com because if there’s one thing an American reader likes, it’s a story about the little guys taking on the big guys….and winning, against ALL the odds. This is a feel good read which charges along at a great pace and you’re never far away from a guaranteed LOL moment. Not only that but the Kindle has just been reduced to under $5. Yes, it’s a story about rock ‘n’ roll radio……but it’s also about family loyalties, brotherhood, business, and huge, huge risks……as two of the UK’s most experienced broadcasters tell the story of how they took on the British establishment……and won. If you can read English, like a laugh, and are engaged by real – life stories by entertaining raconteurs with a real story to tell….this is for you. Already got to number 1 on Amazon UK popular culture sales chart, it has been downloaded on Kindle in 6 countries world wide including the US. An ‘indy’ hit in the UK….now heading for an inbox near you?

END_OF_DOCUMENT_TOKEN_TO_BE_REPLACED 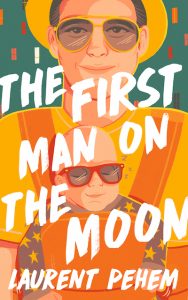 The First Man on the Moon by Laurent Pehem

Laurent and Harry want a baby. Easier said than done for a gay couple. When their adoption application is rejected, the two men embark on an insane adventure in Thailand.