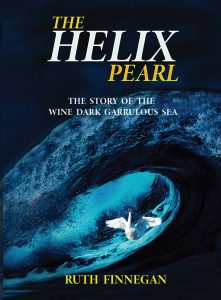 Blurb for back cover
What happens to a story when someone else tells it? And what if that someone is THE SEA? And Homer interposes an oarstroke or two?.

Well you can read it here, in the unique Helix Pearl, the stunning epic mythic talkative voice of the Sea.

Listen here to Homer’s Wine Dark Garrulous Sea. For, strangely ( no wonder it was born in dream) the book is at root the same story and poetic, rhythmic, style as in the earlier (prize-winning) novels “Black Inked Pearl’ and its fairytale prequel “Voyage of the Pearl of the Seas”. But this time it is told from a different perspective – that of the ever- chattering , sounding, wine-dark homeric one, the Sea. It is thus companion and complement (but not in the normal sense sequel) to “Black Inked Pearl”, with the same number of Parts and (sometimes identically titled) chapters. It cycles and recycles round the concept of helix (double helix, the human DNA and divine caduceus, since Greek times and before the image of life and of infinity), the mystic spiral, the swirl of the sea wave, repeated repeated and repeated again in the endless tossing of the ocean, with life – as a bird, as a soul, as the girl Kate – rising from out the centre of the curling turmoil and, in the end, DARING to swim. As with the earlier novels this too somehow emerged, ready-made, in dream — or, to be more exact, in that in-between liminal state that is neither waking nor sleeping but at the same time both.

The romantic tale of a young girl as she struggles with myth, and ocean waves and above all her errant love. You’ll not easily put it down,.