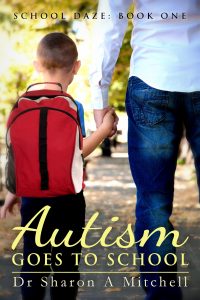 Autism Goes to School by Dr. Sharon A. Mitchell

After suddenly receiving custody of his five year old son, Ben must learn how to be a dad. The fact that he’d even fathered a child was news to him. Not only does this mean restructuring his sixty-hour workweek and becoming responsible for another human being, but also Kyle has autism.
Enter the school system and a shaky beginning. Under the guidance of a gifted teacher, Ben and Kyle take tentative steps to becoming father and son.

Teacher Melanie Nicols sees Ben as a deadbeat dad, but grudgingly comes to admire how he hangs in, determined to learn for his son’s sake. Her admiration grows to more as father and son come to rely on Melanie being a part of their lives.

When parents receive the news that their child has autism, they spend countless hours researching the subject, usually at night, after an exhausting day. Teachers, when they hear that they’ll have a student with an autism spectrum disorder, also try to learn as much as they can. This novel was written for such parents and teachers – an entertaining read that offers information on autism and strategies that work.

What Are Reviewers Saying?
– “A gem of a book”
– “A true delight – Highly, highly recommended
– “Just couldn’t put it down”
– “Highly informative and extremely helpful – Couldn’t take my eyes off it”
– “I loved this book from beginning to end – Just plain awesome”
– “I could feel the author’s passion – What a great way to learn about autism”
– “Entertains, entrances & educates: 3 for the Price of One!”
– “This wonderful book is about a Dad, Ben, meeting his autistic son Kyle for the very first time, when Mom dumps him suddenly on his doorstep, saying she can no longer take care of him. Through the eyes of Ben, we get a glimpse of both the challenges and joys of being a parent of a child who sees the world in different ways.”
– “Unlike some stories that speak of autistic children, this one brings a wealth of hope and information! As we look over Ben’s shoulder, we see a glimpse of the learning tools currently being used in the classroom today, and we get glimpses of things that could be helpful in the day to day life of an autistic child.”

What Inspired You to Write Your Book?
My passion is kids on the autism spectrum. During my decades of consulting, I often heard from parents and teachers of kids with autism that they are hanging on by their teeth. They don't have time to pour through textbooks or search the internet for ideas. Why does learning have to be hard? So "Autism Goes to School" was born – a novel that portrays life with a child with autism along with the struggles, warm moments and strategies that are tried at home and at school.

I was lucky and "Autism Goes to School" became an Amazon bestseller and has won two awards. There are now four more books in the series, each featuring the unique challenges of a child on the autism spectrum along with his/her family and teachers. The feedback from readers is what keeps me writing these books.

How Did You Come up With Your Characters?
The character part is not hard. There are so many fascinating children with autism – the books are composites of many such kids, dredged up from the author's imagination. The adults in the books show the joys and struggles of getting into the mind of a child with autism and helping that child to navigate his world.

Book Sample
Ben grabbed for Kyle’s hand as they approached the front of the school. As usual, Kyle cringed and pulled away.

“All right, all right, just come on already. We’re late. You have to get to school.” I hate being late, Ben muttered to himself. He pulled on the door handle. Nothing. He heaved. “Shit!” Nothing. Kyle, who had remained silent for the last half hour, repeated, “Shit! Shit, shit, shit, shit, shit.”

“No. You can’t say that.” Ben so badly wanted his son to talk to him, but did the kid have to repeat the one taboo word Ben had uttered so far today? He searched for another door, spotted one farther down the building and again reached for Kyle’s hand. The sound Kyle let out made him drop it. “Kyle, come on,” Ben told his son, “we have to get in there.” Kyle came, but, “Shit, shit, shit” came faintly from his mouth. Ben sighed.

It took three doors and more expletives before Ben found one that would allow them to enter the building. He had no idea what was wrong with this place. A school was a public building, wasn’t it?

Once in the school, Ben stopped. He had not thought this far. Did he have to find the room for five year olds on his own? He spotted a sign telling visitors to report to the office and an arrow pointing down the beige hall. Without thinking, Ben put his hand on Kyle’s shoulder to steer him in the right direction. Predictably, Kyle pulled away, rubbing the shoulder that Ben had touched. Ben winced. “Well, just come then, if you don’t want me touching you.” Whatever Kyle might be thinking didn’t register on his face, but he followed Ben anyway.

In the distance, screaming started up. Ben instinctively stepped in front of his son. He stopped. Where was that coming from? Was a child in danger? What kind of a school was this anyway?

They continued cautiously, Ben ready to grab Kyle and run. The screams became louder as they came to an open door. Inside Ben glimpsed some kids sitting around tables, one in a rocking chair, others standing in front of easels and one little boy writhing on the floor as a woman knelt beside him, about to lay a blanket over him. What the hell were they doing to that child to cause him to scream like that?

Ben glanced at Kyle to make sure he was safe, then stepped into the doorway, ready to intervene. As he watched, the woman spoke softly to the screaming child and laid the blanket over him. She pressed it down firmly around him but the blanket didn’t mold to the child’s body the way a blanket should. As she continued to press down with the blanket, the screams lessened to whimpers. The woman then reached for a large plastic ball and started running it up and down the little boy’s body, pressing harder than Ben would have thought advisable. This was a small child, after all.

“Hey,” Ben called. “What are you doing to that kid? Is he all right?” All eyes turned to him. The wailing momentarily eased then started up again. With a nod to a younger woman, the teacher or whoever she was rose to her feet, keeping pressure on the ball until the other woman came to take her place. Then her calm expression changed as she came toward Ben with purpose.

“Please leave my room. You’re disturbing my students,” she said when she got to the doorway where Ben stood.
Ben looked at her. “I’m disturbing your students?” he asked incredulously. “It looks like you’re torturing that poor kid.” The kid in question, calm now, looked out at him with big eyes.

“Does he look disturbed?” the teacher asked. “Don’t answer that,” she added. “This is my classroom and these are my students. Kindly carry on with your own business. If you’re new here, the office is that way.” She pointed in the direction Ben and Kyle had been going.

“I don’t know what your problem is, lady, but I heard a kid screaming and thought he might need help.” Ben backed out the door, shaking his head. His heart settled back into its normal pattern after the fright of hearing the child’s screams. He’d never let anyone like that near his son.

For joining the author’s email/newsletter list you will get:
A free book