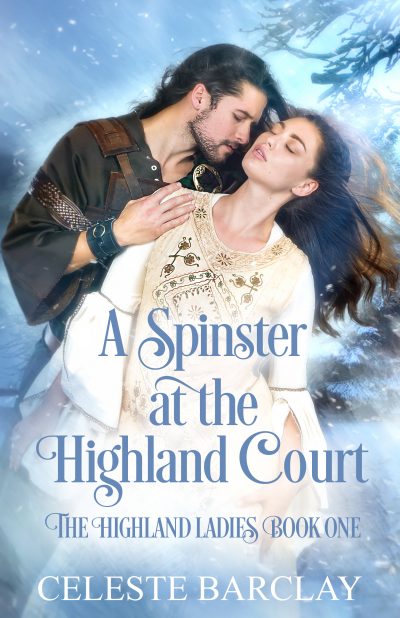 A Spinster at the Highland Court by Celeste Barclay

A spinster lady in waiting…
After four broken betrothals, Elizabeth Fraser believes her father’s political ambitions will keep her from ever finding a husband. Content to be considered on the shelf, Elizabeth would rather be left in peace as one of the queen’s ladies in waiting than engage in flirtations that lead nowhere. She never expected one chance encounter months ago would alter the future she had accepted. Will Elizabeth give Edward a second chance to prove he wants more than a dalliance?

A warrior wanting to return home…
Edward Bruce, the adopted younger brother of King Robert the Bruce, is tired of fighting the English in Ireland. Loyal to his brother but homesick, Edward returns to Robert’s Scottish court in hopes of settling down once more in the Highlands. Edward recognizes the beguiling Lady Elizabeth from a brief meeting that involved one dance and a rushed conversation on the terrace. He still can’t believe the rumor she started to protect her friends. Drawn to her dry wit and independent nature, Edward realizes that his new home will require one particular lady of the keep. Can Edward prove to his Highland lady that his intentions are sincere before time runs out?

A hidden threat…
When Elizabeth and Edward realize their lives are in danger, they must rely on the Sinclair brothers and their wives to help them investigate who might want them dead. Courtly intrigue follows them as their new love blooms and a home in the Highlands calls to them. If you love romance with intrigue and characters that come to life, then you’ll love Celeste Barclay’s steamy A Spinster at the Highland Court.

Welcome to Robert the Bruce’s Highland Court, where the ladies in waiting are a mixture of fire and ice. The Highland Ladies, spin-off series from Celeste Barclay’s The Clan Sinclair series, returns to the Medieval royal court for love and intrigue. A Spinster at the Highland Court is the much requested and highly anticipated story of Elizabeth Fraser who appeared in both His Highland Pledge and His Highland Surprise. She finally has her own steamy love story and HEA. This a full-length novel. The novella previously appeared in the Once Upon a Christmas Wedding anthology.

What Inspired You to Write Your Book?
The Highland Ladies series tackles relevant social topics that affected characters in the Middle Ages as much as they do today. A Spinster at the Highland Court explores gender roles in families as well as in society and politics. I want this series to be relatable to readers but maintain the timelessness of Historical Romance.

How Did You Come up With Your Characters?
Elizabeth Fraser was introduced in The Clan Sinclair series, but she receives her own full length story. I wanted Elizabeth to be an independent woman but one loyal to her friends and family. I wanted a character who could be self-sufficient but still held the vulnerability of someone forced to grow up too young.
Edward Bruce, in this book, is a fictitious adopted brother to Robert the Bruce. I wanted to create a character that is often on the outside looking in despite close family ties. He's a warrior longing for a peaceful home where duty to king and country no longer dominates his life. I wanted to the hero to be interested in putting family first.

Book Sample
Elizabeth stepped through the chapel doors and took a sharp right directly into a broad, muscled chest. Her nose landed in the small dip in the man’s sternum. Strong but gentle hands cupped her shoulders and helped her to take a step back. The look of shock on the man’s face surely matched hers, except when his morphed into a smile, hers turned to horror. She jerked away and turned in a complete circle as she tried to determine if anyone had seen them.
“No one has looked this way,” the deep baritone murmured, wrapping around her like a fur cloak. “If I’d known I’d meet you so quickly, I might have paid more attention to where I waited.”
The humor in his voice rang in Elizabeth’s ears, but she failed to find anything funny about the situation.
“Excuse me, Lord Badenoch. I should have looked where I was going.” Elizabeth dipped a curtsy and tried to escape.
Edward watched the woman he spent his morning fantasizing about attempt to retreat.
“Don’t scamper away quite yet.” He kept his voice low so only she could hear. He was sure someone was bound to see them standing together, so the least he could do was keep his voice down while he tried to seduce her.
Elizabeth’s brows lowered and lines formed around her down-turned lips. “I’m not a squirrel, a chipmunk, or any other rodent. I don’t scamper,” Elizabeth hissed.
She spun on her heel. Edward was prepared to follow her when his name was called by the only person who could force him to stay. He stifled his sigh.
“Brother,” King Robert slapped his hand on Edward’s shoulder as only a brother could do. “I’m glad to see you again. We didn’t have enough time to speak last night. Your arrival came as a surprise and late.”
“I had no desire to sleep on the ground again.”
“Just what did you sleep on last night?”
Edward ground his teeth. His brother’s comment might have been accurate several years ago, but these days he rarely dallied with any woman at court. It wasn’t worth the hysteria it caused when he returned to Ireland and Sinead. The woman had more eyes and ears at court than any foreign spy. Each time he wondered why he returned to her, he remembered her skills. Skills that brought him hours of pleasure when he could escape the mud and rain of the battlefield. She was also a brilliant strategist. Her advice had served him well over the past two years while fighting the British in Ireland.
“I slept on the bed in my chamber. It was nice to have the quiet and the space to myself.” Edward looked at the man he called brother. Their only resemblance was in the coincidental color of their hair. Even there, the king’s was closer to carrot while Edward’s hair, which had darkened with age, was more russet. When they were children, their shock of red hair made many people wonder if Edward was the king’s illegitimate brother rather than his adopted distant cousin. It was only the reputation of his mother that kept people from voicing their suspicions. When Edward’s father died, his mother retired to a convent, where she died only a year later. Left an orphan if not in name then by status, the Bruce family took him in. Life in the Scotland was hard enough without being a child with no family. The two men were close even though Robert was several years his senior. Edward was closer in age and relationship to Robert’s younger brother by blood. Both men were named Edward and had been inseparable since childhood. When Robert sent his blood brother to Ireland, his adopted brother followed.

Links to Purchase Print Book version – Click links for book samples, reviews and to purchase
Buy A Spinster at the Highland Court Print Edition at Amazon

For joining the author’s email/newsletter list you will get:
Free prequel novella to The Clan Sinclair